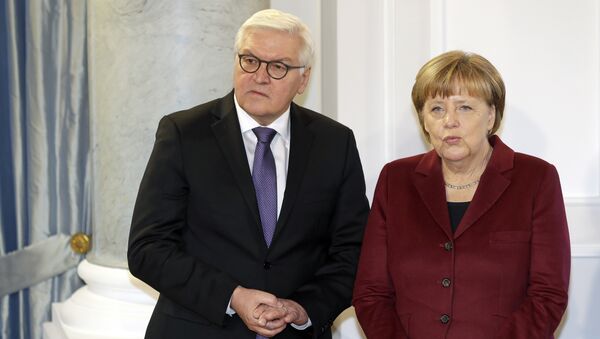 Four weeks of negotiations to form a new German government have collapsed after the Free Democratic Party (FDP) dramatically walked away from the talks on Sunday night. German Chancellor Angela Merkel has said that new elections are the best bet for the country's next government and confirmed her intention to lead her party into a snap vote.

FDP leader Christian Lindner announced his party's withdrawal after 12 hours of last-ditch talks. He said that the FDP had wanted to usher in a political "change in trend" but this had proved impossible.

"It is better not to govern than to govern in the wrong way," Lindner tweeted.

Rest of Jamaica gang might call Lindner’s action irresponsible, but walking out of talks after surprisingly tough stance on migration could indicate strategy similar to one that made Kurz successful in Austria. If so, FDP could draw votes from CDU & AfD.

The four participants in the "Jamaica Coalition" talks were Merkel's center-right Christian Democratic Union (CDU) and its Bavarian sister party, the Christian Social Union (CSU), the Greens and the classically liberal FDP. The parties' colors gave rise to the nickname "Jamaica."

Disagreements over such issues as migration and climate change, in particular between the FDP and the Greens, reportedly prevented the parties from reaching a deal. In contrast to the FDP, the Green party leadership has said it is willing to take part in more negotiations.

Recriminations have begun since Lindner pulled out of the negotiations. Politicians from the CDU and the Greens have attacked Lindner for walking out, while the FDP has pointed the finger at Merkel for her "chaotic" organization of the talks.

"The negotiations were chaotic from the beginning, they were not structured, they were not organized," FDP politician Volker Wissing told Deutschlandfunk.

After meeting with Chancellor Angela Merkel at Bellevue Palace on Monday, German President Frank-Walter Steinmeier said that the breakdown of political negotiations to form the next government has left Germany facing an unprecedented situation.

"Eight weeks since the Bundestag elections, talks to form a new government have so far failed to yield results. We are now facing a situation that has never happened before in the history of the Federal Republic of Germany, that is for almost 70 years," Steinmeier said.

#Germany president Steinmeier calls on parties to resume responsibility, says will talk to CDU/CSU, FDP, the Greens but also to SPD. #JamaikaAbbruch pic.twitter.com/6tHX1c9UJQ

According to Bild, President Steinmeier is planning to hold talks on Tuesday morning with the leaders of the CSU, the FDP, the Greens and the Social Democratic Party (SPD). However, the SPD has ruled itself out of another "grand coalition" with Merkel's CDU/CSU.

"We will not enter into a grand coalition," SPD leader Martin Schulz said on Monday. "We think that new elections are the right way forward."

The right-wing Alternative for Germany (AfD), which gained the third-largest number of seats in the German Bundestag folowing September's elections, has also ruled itself out of government.

"We will be ready for talks on government participation in 2021 at the earliest," leading AfD politician Joerg Meuthen told RedaktionsNetzwerk Deutschland.

"The "time has come" for Angela Merkel to leave the office of chancellor because she "failed" to form a new German coalition government, Gauland said.

Here's the latest poll I could find by public broadcaster ARD (Nov 17), essentially the same as before, but the next will probably vary a bit. My guess is we are indeed headed for a new election in 2018, though I'm told, constitutionally, Merkel *must* try minority gov' first. pic.twitter.com/uNKGSgq0hx

A Forsa poll conducted for RTL television on Sunday

​According to opinion polls, another election is likely to yield similar results to the September 24 vote. That gave the CDU/CSU 32.9% of the popular vote, followed by the SPD (20.5%) and the AfD (12.6%).

There is concern about the German situation in other EU countries. Dutch Minister of Foreign Affairs Halbe Zijlstra said that "new elections are the worst case scenario."

"They've only had one round of talks. In the Netherlands it took us over seven months. According to me, they still have five months to go. So I would say: think about it again, maybe start talking again, instead of new elections." Zijlstra told the Netherlands' RTL Nieuws.

In Moscow, Kremlim spokesman Dmitry Peskov said Moscow hopes that Germany will complete the process of forming a government "successfully as soon as possible," adding that Russia sees the issue as an internal affair for Germany.

According to data from Bloomberg, the euro single currency fell in value by 0.42% against the dollar and 0.53% against pound sterling on Monday amid the uncertainty in Germany.

000000
Popular comments
Good news and keeps Germany occupied for a few more months. Hopefully a coalition that wants peace with Russia and goodbye to the EU will come to power?
anne00marie
20 November 2017, 21:47 GMT1
000000
The times, they are a-changin'. Turkey is questioning her membership in NATO. Saudi Arabia (!) and Israel would like to start a war against Iran. And the ruling class of Germany want(s) something completely different at the end of 2017. They want a snap election, because they know that the AfD will get 20-25 % of the votes. The German people needs a government which is able to stop 48 years of socialism in Kraut-Land. The Kraut-Eaters will suffer severe cuts in their wallets. www.westernspring.co.uk/the-coudenhove-kalergi-plan-the-genocide-of-the-peoples-of-europe Time will tell.
Realo
20 November 2017, 22:02 GMT
000000
Newsfeed
0
New firstOld first
loader
LIVE
Заголовок открываемого материала
Access to the chat has been blocked for violating the rules . You will be able to participate again through:∞. If you do not agree with the blocking, please use the feedback form
The discussion is closed. You can participate in the discussion within 24 hours after the publication of the article.
To participate in the discussion
log in or register
loader
Chats
Заголовок открываемого материала
Worldwide
InternationalEnglishEnglishMundoEspañolSpanish
Europe
DeutschlandDeutschGermanFranceFrançaisFrenchΕλλάδαΕλληνικάGreekItaliaItalianoItalianČeská republikaČeštinaCzechPolskaPolskiPolishСрбиjаСрпскиSerbianLatvijaLatviešuLatvianLietuvaLietuviųLithuanianMoldovaMoldoveneascăMoldavianБеларусьБеларускiBelarusian
Transcaucasia
ԱրմենիաՀայերենArmenianАҧсныАҧсышәалаAbkhazХуссар ИрыстонИронауОssetianსაქართველოქართულიGeorgianAzərbaycanАzərbaycancaAzerbaijani
Middle East
Sputnik عربيArabicArabicTürkiyeTürkçeTurkishSputnik ایرانPersianPersianSputnik افغانستانDariDari
Central Asia
ҚазақстанҚазақ тіліKazakhКыргызстанКыргызчаKyrgyzOʻzbekistonЎзбекчаUzbekТоҷикистонТоҷикӣTajik
East & Southeast Asia
Việt NamTiếng ViệtVietnamese日本日本語Japanese中国中文Chinese
South America
BrasilPortuguêsPortuguese
NewsfeedBreaking
16:14 GMTRussia Urges UN Mission to Ensure Security of Staff in Russian Office in Pristina
16:06 GMTGreek Police Say 7 Officers Injured in Chasing Car Thieves in Athens, One Offender Dead
15:47 GMTRussia-Turkey Friendship Park Opens in Antalya - Video
15:06 GMTTuskless Elephants Evolve in Mozambique Amid Ivory Poaching, Scientists Say
15:03 GMTCCTV Footage Shows Moment Russian Explosives Plant Turned Into Deadly Blazing Inferno
14:54 GMTStunning Discovery of 193 Million-Year-Old Dinosaur Eggs Sheds New Light on Reptiles’ Early Species
14:52 GMTErdogan: Ambassadors of 10 Countries Calling for Human Rights Activist's Release to Be Expelled
14:26 GMTAntifa Protest in Support of Left-Wing Politics Takes Place in Stuttgart
14:18 GMTGazprom Ready to Prolong Gas Supplies to Moldova if Kishinev Pays Gas Debts
14:06 GMTRussian MoD: Berlin Must Know How Amassing Troops Near Russia's Border Ended for Europe in Past
13:59 GMTTokyo Says Self-Defenсe Forces Fighters Scrambled Over Chinese Chopper Takeoff Near Danjo
13:54 GMT24-year-old Who Prepared Fatal Prop Gun for Baldwin Was Worried She ‘Wasn’t Ready’ for Armourer Job
13:15 GMT‘Wicked Sense of Humour’: Turkey Pinches Reporter’s Buttocks, Other Birds ‘Giggle’ - Video
13:02 GMTRally in Support of Assange Takes Place in London
12:28 GMTDHS to Dole Out $455K to Erect Fence Around Biden’s ‘Summer White House’ in Delaware
12:21 GMTMoscow Assured Chisinau of Additional Gas Supplies in October, Moldovan Deputy Prime Minister Says
12:20 GMTMerkel Says Always Felt 'Significant Differences' of Opinions With Putin
12:12 GMTAuthor of Infamous Steele Dossier Claims Putin May Have Served Him Tea
12:08 GMTYellow Vest Protesters Hold New Round of Anti-Government Rallies in Paris
11:50 GMTSouth Korea Reaches 70% Full Vaccination Goal, Reports Say