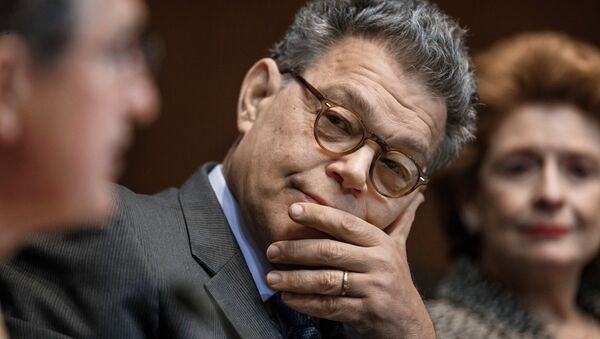 © AP Photo / J. Scott Applewhite
Subscribe
Another woman has come forward with accusations of sexual misconduct against Democratic Senator Al Franken, just days after he apologized for a previous offense.

Just days after Franken issued an apology to Leeann Tweeden, a Los Angeles-based television anchor who accused him of forcibly kissing her and groping her during a 2006 USO tour to the Middle East, Lindsay Menz, 33, claims the senator groped her buttocks in 2010.

According to Menz, the incident with Franken happened in a booth inside a state fair sponsored by her father, the Guardian reports. Franken, already a senator for two years, reportedly came in during an event and the two decided to take a photo together.

Trump in Hot Water After Bashing Al Franken Over Sexual Misconduct Claims
Franken came by, Menz told reporters, and "pulled me in really close, like awkward close, and as my husband took the picture, he put his hand full-fledged on my rear. It was wrapped tightly around my butt cheek."

The fact that it was Menz's husband who was taking the picture just adds to the story.

The picture itself shows the two people standing close, their heads touching, but neither their hands nor their bodies below their shoulders are visible.

A woman tells CNN that Al Franken grabbed her buttocks while she was taking a photo with the sitting US senator in 2010. Franken says he doesn’t remember the photo and feels “badly” that she felt disrespected. https://t.co/MlOuFCqKai pic.twitter.com/yHTbGR34gC

​Franken responded to the allegation by saying he does not remember taking this picture, but still feels "badly," for the situation.

"I take thousands of photos at the state fair surrounded by hundreds of people, and I certainly don't remember taking this picture," Franken said in an interview with CNN. "I feel badly that Ms. Menz came away from our interaction feeling disrespected."

Some had hoped Franken might make the Democratic Party's 2020 presidential list. According to a Washington Post article, "Franken was beloved among Democrats, someone who's smart and actually understands policy, but is also witty and performs well on television."

Franken's statements have been contrite.

"I respect women. I don't respect men who don't," he said regarding the first episode with Tweeden. "And the fact that my own actions have given people a good reason to doubt that makes me feel ashamed."

US President Donald Trump, a man accused of a variety of sexual misconduct and a man on record as having used his wealth and power as a cover to grope women, took the opportunity to scold the Democrat.

"The Al Frankenstein picture is really bad, speaks a thousand words," Trump Tweeted, referring to a picture of Franken groping or pretending to be groping a sleeping Tweeden.