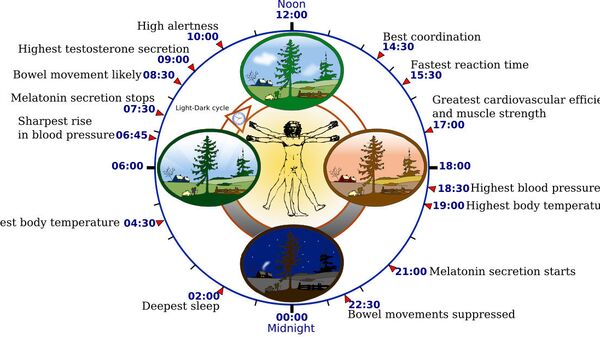 Last month, biologists-geneticists Jeffrey C. Hall, Michael Rosbash and Michael W. Young were awarded the Nobel Prize in Physiology/Medicine for their work on circadian rhythms – the biological clocks driving our sleep-wake rhythms. Geneticist Charalambos Kyriacou told Sputnik why the research is so important for people living in the modern world.

Hall, Rosbach and Young were awarded the Nobel for work spanning decades to discover the mechanisms governing circadian rhythms in human beings, animals and plants, and how plant and animal life adapts its biological rhythms to changes in the environment which take place through evolution.

2017 Nobel Prize for Medicine Awarded for Research on 'Biological Clocks'
Dr. Charalambos Kyriacou, a professor of behavioral genetics at the University of Leicester, who has worked alongside and encouraged Drs. Hall and Rosbash in their research at various stages in the 1970s and 80s, spoke to Radio Sputnik about what the Nobel-winning research means for the study of biological rhythms, and why its findings are so important for individuals and society as a whole.

Sputnik: Before we go any further and talk about the practical implications of this discovery, could you explain to us please what exactly it's about? Scientists have known about the biological clock for ages. What makes this particular discovery worthy of a Nobel Prize?

Dr. Charalambos Kyriacou: These daily biological clocks – we call them 'circadian clocks' ('circa' is the Latin for 'about', and 'diem' is 'a day'), ticking with a cycle of about a day, have been known since – well one of Alexander the Great's soldiers actually noticed circadian rhythms in the way that plants hold their flowers up towards the sun during the day, and drop during the night. The first scientific study of plant clocks was done in the 1720s by a French philosopher-scientist.

So we've known about them for hundreds [if not thousands] of years, but they've only started to be taken seriously since around the 1930s and 40s by a few scientists. And really up to the 1950s and 60s, the whole field of biological timing was thought to be a bit weird and flaky by the rest of the scientific community. It was only when a scientist called Ron Konopka, working with famous geneticist Seymour Benzer, [discovered mutations] in the fruit fly. Fruit flies have a sleep/wake cycle of 24 hours, just like we do. In 1971, Ron Konopka found three 'mutants' in the fly that changed the clock – one mutant's clock ticked very quickly, and had a 19 hour cycle, another ticked slowly, and had a 29 hour cycle, and another mutant was an insomniac, and was completely arrhythmic.

Climatologist Warns of Mass Disasters That Could Make Whole Countries Disappear
That was the very first study showing that the clock was genetically encoded within us. What Hall, Rosbash and Young have done is that they've taken these mutations that Konopka and Benzer found and described what these mutations do molecularly. All three mutations were found in the same gene (called the period gene for obvious reasons, because if you change the timing of the clock you're changing the period of the clock)…What Hall, Rosbash and Young did molecularly describes what this period gene was doing – that's their great contribution.

Because since the 1980s, what we've [known is] that the clock percolates through everything that we do – our behavior, our physiology, our biochemistry. The clock is [extremely] important in everything that we do, because we evolved on a rotating planet. So it's not surprising that natural selection favors organisms that anticipate the regular changes in light and dark, cold and hot temperature that is a feature of our rotating planet. That's why they won the Nobel Prize – because basically, the circadian clock underlies everything that's medical about us.

Sputnik: So these scientists actually kind of took apart the time-keeping machinery that's all-important for us?

Dr. Kyriacou: Exactly! And the remarkable thing is…that all the genes in the fruit fly also build the clock in you and me, with very slight modifications. When evolution solves a problem – how to build a clock, it's very conservative. It keeps that solution for different organisms. So mammals have ostensibly the same molecular components of the clock as the fly, which is another bonus, and another reason why the work of Hall, Rosbash and Young is so generalizable to other organisms.

Sputnik: Does this mean that we now know all there is to know about this subject, or is there more research to be done?

Dr. Kyriacou: No no, not at all. The biological clock is generated by many genes. A lot of the core genes have now been identified, but we are always being surprised by unexpected results. For example, a colleague of mine at Cambridge recently discovered that it's not just neurons that are important for generating mammalian rhythms, but also glial cells [the cells surround neurons and hold them in place in the brain], which are also extremely important in generating  normal rhythms. That was published only a couple of months ago. So it's a fascinating field, and we're always finding unexpected results.

Sputnik: So what are some of the practical implications of this discovery?

Dr. Kyriacou: One of the [mutations in the fruit fly's genes] was called the period short, because it had a 19 hour rhythm. The molecular lesion in the period gene was identified many years ago. There was an extended family of people that showed this strange behavior: people in this family got up very early and went to bed very early; they couldn't help it. Well it turned out that they had a mutation in their period gene, making their clock tick faster. So how do people with a fast clock of 21-22 hours relate to our 24 hour world? What they do is move all their behavior forward by a few hours; they are what we call extreme larks, as opposed to night owls…[And] it turned out that the molecular lesion in these people was exactly the same as the one in the fruit fly 'period short' mutation.

Canine Companion: Major Study Reveals That Dog Owners Live Longer
So yes, different people have variations in their clock genes. Michael Young just picked up another natural mutation in the Turkish population, finding that a mutation in another gene, the cryptochrome leads to late sleeping – meaning getting up late and going to bed late. These are natural variations found in a certain percentage of the population.

Sputnik: Does this mean that different nationalities have different clocks based on their geographic location? And can this clock be inherited?

Dr. Kyriacou: Well there have been some reports that different populations  carry different variants, but that's not been generally reproduced [scientifically]. For example, there's one variant found in northern populations in the Northern Hemisphere, and southern populations in the Southern Hemisphere. So [scientists] are still trying to wrap their heads around that, and whether it's [a trend], or just an accident. But it is absolutely true that variations in these core clock genes in humans have been shown to have large implications on their behavior.

Sputnik: How does light figure into all of this?

Dr. Kyriacou: In plants and fruit flies, there's a photoreceptor called the cryptochrome, and it responds to blue light…In humans there's also a photoreceptor, called melanopsin, which again is blue light responsive. So let's look at our lifestyles. I have two teenage kids. What do they do? They sit on their phones or their computers until late into the night, and what comes out of computers? Blue light. And what blue light does is it keeps you awake…So what we're doing by working late at night, watching television, computer and phone screens is delaying how long it takes us to get to sleep by about an hour. So yes, we've become sleep-deprived, because we're absolutely addicted to this blue light technology. Some companies are now recognizing this, and so are trying to turn out the amount of blue light coming out of their screens.

Sputnik: It's said that all of Western society is suffering from chronic sleep deprivation…

Dr. Kyriacou: It is, and that's because people tend to work harder, have personal computers and are taking their work home, and working late at night. We are sleep-deprived, our sleep hygiene is pretty terrible, and it does have implications. Probably the worst group of people in terms of sleep hygiene are shift workers. They comprise about 25% of [the workforce of industrialized countries]. If you take any index of health…you find that these are not happy bunnies. People who have rotating shifts [which advance from week to week are] changing the complete circadian lifestyle, and this disruption of their clocks leads to all sorts of health problems, including things like cancer, cardiovascular disease, depression, and of course sleep disorders. The latter have knock-on effects on all sorts of behavior, including things like how bright you are during the day.

Mind Over Matter: Russian Scientists Develop Prototype of Electric Neuro-Mobile
In fact, I don't think it's any coincidence that the three great industrial accidents of my generation – Bhopal, Three Mile Island and Chernobyl, were all caused by operator error at about three in the morning, which is when the circadian clock is at its trough. Your body temperature is at its trough; your vigilance rhythms are at their trough; and all three of those terrible accidents were caused by jail-hacked operator error, which was a big contribution. So yes, disruptive sleep patterns, particularly in shift workers, have serious health implications for a big proportion of our population.

Sputnik: So what, if anything, can be done? How does one remedy this?

Dr. Kyriacou: Education. There's a wonderful study done many years ago where they took a factory in Ohio that had this rotating shift, where workers would advance their shift by eight hours every week. These were not happy people, taking lots of time off for sickness. Then a Harvard circadian biologist went there and talked to [management]. He said 'Look, the circadian clock of a human responds better if instead of advancing the clock, delaying it by eight hours.'…They tried it, and found that their productivity was so much better, the number of days off was so much less, and just a happier working population.

Ancient Skull From China Could Rewrite History of Human Evolution
So education can help in reducing the effects of our shiftwork society, our 24 hour society. [This also means] educating people not to have their computers on late at night – to stop using their computers a couple of hours before they plan to go to bed.

I think the Nobel Prize will help, because it actually says that this is a serious area of scientific endeavor, and people, [particularly people in medicine] will take note.