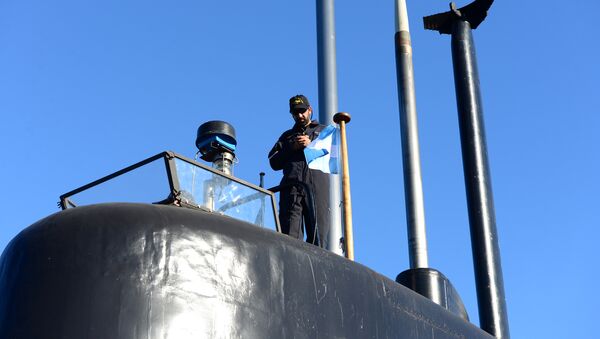 Iridium Communications satellite operator said Monday that it had detected no calls from missing Argentinian submarine San Juan since Wednesday, but pointed out that there could be another company's equipment aboard.

MOSCOW (Sputnik) — On Saturday, the Argentinian officials said the country's naval bases registered seven satellite calls, but the connection with the crew of the submarine has not been established yet.

"While some reports indicated seven satellite phone call attempts have been made on November 18, Iridium can confirm that these were not attempted on our network… Unfortunately, our network data does not show any communications or communications attempts from the device since November 15th at 11:36 GMT, when the last call from the device was made," the company said in a statement.

Iridium Communications added that there could be another company's equipment on the submarine and it could be engaged in the crew's attempts at distress calls.

NASA Gives Helping Hand in Search for Argentine Submarine
San Juan submarine with 44 crew on board has been missing since its last communication on Wednesday en route from the port of Ushuaia to the coastal city of Mar del Plata in Buenos Aires province. Aircraft and vessels have been searching the area where the ARA San Juan was last detected.

A number of countries have offered their help, including the United Kingdom, the United States, Chile and others.

The United States is sending the Submarine Rescue Chamber and underwater intervention Remotely Operated Vehicle to Argentina to help search for the missing submarine, the US Naval Forces Southern Command said in a statement.

The US is also sending Bluefin 12D (Deep) drone and three Iver 580 drones as well as aircraft, equipment and personnel to help Argentina in its search operation.

The UK Royal Navy has sent an elite submarine rescue team to assist in the search, according to the Telegraph newspaper.

The Argentine authorities reman in constant contact with the relatives of the missing submarine crew, Argentina's President Mauricio Macri said.

44 people are missing in the ocean right now. My thoughts and prayers go to them and their families, the whole crew of submarine A.R.A San Juan.🇦🇷#hope #neverlosehope #missing #ocean #sea #submarine #sanjuan #sundaymorning pic.twitter.com/o8PjHky0Ol

​Argentine naval spokesman Enrique Balbi earlier said that the submarine may have suffered a communications error. According to the newspaper Clarín, the submarine could have experieced a fire or a technical failure.