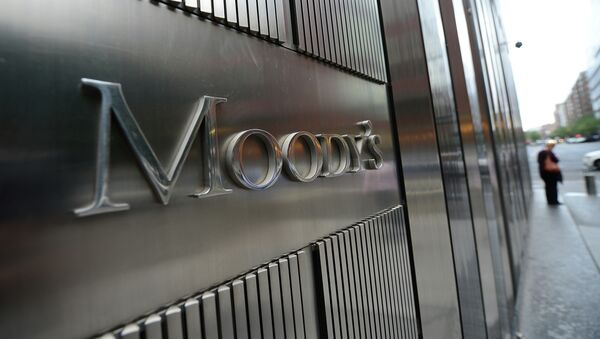 A rating upgrade has been achieved after a 13-year gap; though surprisingly at a time when the country’s rate of growth in national income is falling and there is serious concern over the government’s fiscal discipline.

New Delhi (Sputnik) — The credit rating agency Moody’s has upgraded its rating of India’s sovereign bond to Baa2 from Baa3 and changed its rating outlook to “stable” from “positive” as it feels that risks to India’s credit profile have been broadly balanced. Moody’s has also backed the recently introduced goods and services tax (GST) viewing it as a good way of boosting productivity by removing barriers to interstate trade.

“While India’s high debt burden remains a constraint on the country’s credit profile, Moody’s believes that the reforms put in place have reduced the risk of a sharp increase in debt, even in potential downside scenarios,” Moody’s said in a statement.

The rating upgrade comes at the time when the country’s rate of growth in national income is falling and there is serious concern over the government’s fiscal discipline. The banking sector is still in bad shape and it is yet to find a roadmap to recapitalization. Moody’s has itself projected moderate growth in India’s gross domestic product (GDP) in the coming months.

“Moody's expects real GDP growth to moderate to 6.7% in the fiscal year ending in March 2018 (FY2017). However, as disruption fades, assisted by recent government measures to support SMEs and exporters with GST compliance, real GDP growth will rise to 7.5% in FY2018, with similarly robust levels of growth from FY2019 onward,” Moody' press statement reads.

Meanwhile, in another development, Moody’s has agreed to pay a nearly $864 million penalty to settle allegations by the US federal and state authorities that the agency was manipulating ratings in exchange for money.

“Moody’s ratings were “directly influenced by the demands of the powerful investment banking clients who issued the securities and paid Moody’s to rate them,” Connecticut’s attorney general, George Jepse,, said in a statement on Friday.

Connecticut had filed a lawsuit against Moody’s in 2010 and later 21 other states had joined the case with similar claims.