Hariri in Paris: 'France Makes Political Bet' by Showing it Can Act as Mediator 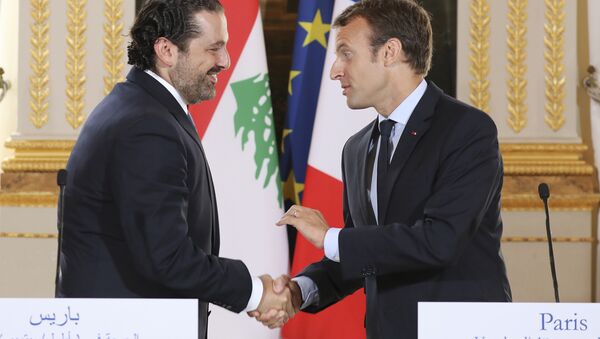 © AP Photo / Ludovic Marin
Subscribe
Researcher at the French Institute of Middle East Nicolas Dot-Pouillard and Director of the Institute of research and studies on the Mediterranean and the Middle East Jean-Paul Chagnollaud have spoken to Sputnik about the upcoming meeting between former Lebanese Prime Minister Saad Hariri and French President Emmanuel Macron.

PARIS (Sputnik) — Former Lebanese Prime Minister Saad Hariri, who announced his shock resignation earlier in November, has arrived in France on Saturday at the invitation of French President Emmanuel Macron.

"With regard to the political situation in Lebanon, I will go to Beirut in the coming days, I will participate in the independence celebrations, and it is there that I will make known my position on these subjects after meeting President [Michel] Aoun," Hariri said after holding talks with Macron.

French authorities could host an international meeting in Paris in support of Lebanon, a source in the Elysee Palace told reporters Saturday after Macron's talks with Hariri.

"Our task is to do everything to ensure Lebanon's stability. For this purpose, the [French] president has been in constant direct contact with the leaders of Lebanon, Saudi Arabia and other countries of the region during the past weeks," the source stressed.

Nicolas Dot-Pouillard, a researcher at the French Institute of Middle East (IFPO) think tank, has told Sputnik that France’s eagerness to act as a mediator in the Lebanese crisis was not surprising, given the country’s historical ties to the region.

“France’s role in the region is firstly due to its historical power through the Mandate for Syria and Lebanon … So in this regard it is not surprising that it is attempting to mediate in the situation around Saad Hariri,” Dot-Pouillard said.

The French Mandate for Syria and the Lebanon was handed to France by the League of Nations after World War I during the partitioning of the Ottoman Empire after its defeat. The mandate over Lebanon lasted until 1943, while Syria attained independence in 1946.

At the moment, certain actors, in particular Russia and the United States, are actively engaged in the region’s affairs. The expert noted that the crisis, caused by Hariri’s unexpected resignation, was a chance for France to also gain a stronger position at the geopolitical level.

“France is trying to set foot in the region at a moment when other countries are also very active … France is trying to have a diplomatic comeback, by saying that it can act as a mediator and by doing so is making a political bet,” Dot-Pouillard said.

According to Jean-Paul Chagnollaud, the director of the Institute of research and studies on the Mediterranean and the Middle East (iReMMO) think tank, even though France’s political means were too limited to “have real influence,” it still could contribute to resolving the crisis.

“France has a military presence in Lebanon within the framework of UNIFIL [United Nations Interim Force in Lebanon]. The two countries also have a real cultural alliance. It might not mean much at the level of international relations, but if there is a political will on behalf of Paris, it still has the means to have some sort of influence, even though it cannot be compared to the capacity for action of Russia or the United States,” Chagnollaud said.

Lebanese President Michel Aoun has not recognized the resignation of Hariri, echoing Hezbollah leader Hassan Nasrallah’s concerns that the statement could have been made under pressure by the Saudi authorities, a claim denied by Riyadh. Chagnollaud noted that France could succeed as a mediator, since it had good relations with all the three countries involved in the crisis.

“I think France previews the risks, serious tensions, violence or even war that could happen there, and it tries to play a role of a mediator while recognizing the importance of Iran, which I think is very important … It [France] has very good relations with Saudi Arabia, but also with Lebanon… I think it is in the common interest to have a country like France act as a mediator in the Middle East,” the expert concluded.