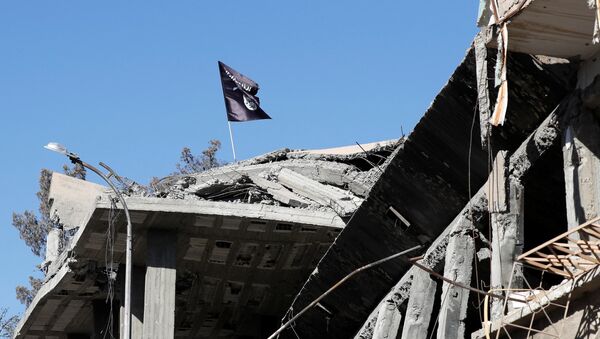 WASHINGTON (Sputnik) — Efforts in Raqqa to return to normal life are being hampered by explosives left behind by Daesh terror group, one of which recently killed a Syrian bomb technician who had been trained by US coalition forces, according to Special Presidential Envoy for the Global Coalition to Counter the Islamic State (Daesh) Brett McGurk.

"ISIS [daesh] terrorists planted explosives in nearly every structure downtown, to ensure life cannot return," McGurk stated in a Twitter message on Friday. "Here, at a main hospital, a brave Syrian EOD [Explosive Ordinance Disposal] technician, trained by our coalition, was killed last week. More are still at work throughout the city."

The tweet included a photo of the bullet scarred facade of the four-story hospital cited by McGurk.

Iraqi Military Retakes Last Daesh-Held Town of Rawa
McGurk has posted a series of tweets during a series of meetings with US-led coalition officials in Syria and Iraq this week, including a visit to Raqqa on Friday.

In a separate tweet, McGurk reported that at least 6,000 Daesh fighters were killed in the battle for Raqqa. The tweet included a photo of more than three dozen bearded Daesh fighters who had surrendered.

McGurk did not mention published accounts, first reported by BBC and later confirmed by US officials, that thousands of Islamic State family members and hundreds of fighters had been allowed to flee Raqqa in convoys prior to the city’s capture.