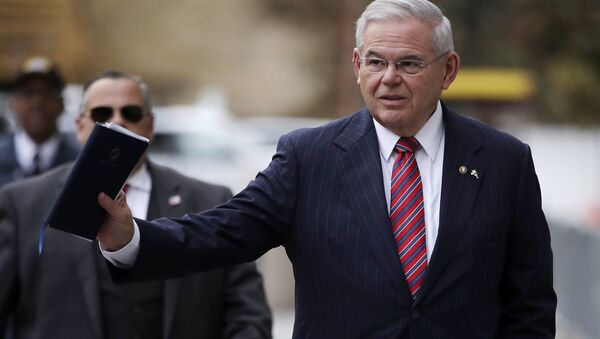 On Thursday, Democratic Senator Robert Menendez's bribery trial ended in a mistrial after the jury was unable to reach a unanimous verdict on the 18 charges against the New Jersey official.

After speaking with all 12 jurors involved in the case, presiding Judge William Walls released a statement, saying, " further deliberation would be futile and there is no alternative but to declare a mistrial."

While the victory was a proud moment for Menendez and his camp, the same could not be said for the US Justice Department.

​Speaking with Sputnik Radio's Fault Lines with Garland Nixon and Lee Stranahan, Dominic Carter, a reporter for Verizon Fios News, says that the DOJ "is now going to have to think long and hard before they bring a case [against a politician]."

"You have to understand that… [this trial] has redefined in a bad way how society is going to go after allegedly corrupt officials," Carter told show hosts Nixon and Stranahan. "Let's face it guys, no politician is going to come up with a ‘quid pro quo' and put it in writing as to their corrupt act. It's almost impossible now."

Though the 63-year-old politician didn't thank the US Supreme Court following the mistrial announcement, Carter thinks he probably should have, since their 2016 overturning of Virginia Governor Bob McDonnell's conviction played a heavy role.

‘Hung Jury:’ Menendez Jury Deadlocks as Tensions in Deliberation Room Rise
Like Menendez, McDonnell was hit with bribery charges for accepting gifts and contributions from a donor. Though McDonnell's fate seemed sealed after courts convicted him of the charges in 2015, the Supreme Court later overturned the case after the prosecution used the term "official act," which they stated was too broad a description to encompass McDonnell's dealings.

"The McDonnell case out of Virginia made it 5,000 percent harder for federal prosecutors to get a political corruption conviction," the Verizon Fios reporter told guest host John Kiriakou. "I don't think you're going to see many more… political corruption cases unless it's open and shut because it's almost impossible to prove."

The next step is whether or not the DOJ will attempt to retry the case, which Carter says is unlikely. The reporter notes Menendez may see some backlash from his friends, even if it only amounts to a slap on the wrist.

Menendez was accused of abusing his power in connection to dealings with Florida ophthalmologist Salomon Melgen, a figure the politician's defense repeatedly described as his friend. According to the prosecution's argument, Menendez accepted gifts and vacations in exchange for using his political influence to convince the Department of Health and Human Services to brush aside claims that Melgen overbilled Medicare by millions of dollars.