Several Foreign Nationals Detained in Athens Over Clashes With Police 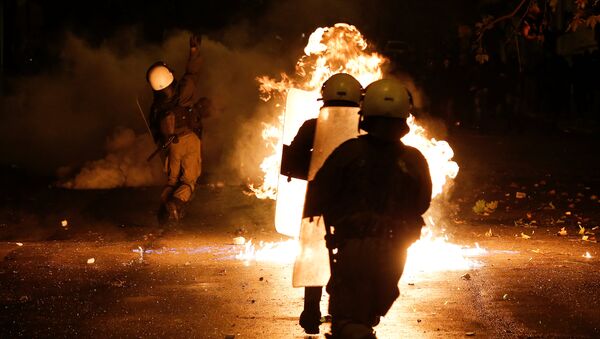 MOSCOW (Sputnik) — Seven foreign nationals were among those arrested in the course of a coordinated police operation and the charges include inflicting bodily harm, attempt at arson, damages to property and violations of law on arms and drugs, the Athens News Agency — Macedonian Press Agency reported on Saturday.

Clashes between activists and police erupted in Athens on Friday after a rally commemorating the 44th anniversary of a 1973 student uprising against the US-backed Greek military junta, local media reported. According to AMNA news agency, after the demonstration, attended by 13,000 people, had reached the US Embassy, anarchists, who did not take part in the rally, began to throw stones and Molotov cocktails at police officers deployed on the demonstration's route. Police, in response, used tear gas, stun grenades and truncheons against the attackers.

#Clashes between #protesters and #riot #police after the #Anniversary #rally of the 1973 students uprising against the military #junta in #Athens. #Greece @YannisKolesidis pic.twitter.com/89mlLSticV

​Clashes between police officers and anarchists also took part near the National Technical University of Athens. Nearly 100 people pelted the police with bottles there, after which the officers used tear gas and flash-bang grenades.

#Greece: Clashes are ongoing in #Exarchia neighborhood of #Athens. pic.twitter.com/Lz5zZsKXqB

Greece Should Renew Military Cooperation With Russia - Greek Politician
In November 1973, students took over the National Technical University of Athens as a protest against the military junta's interference in the activities of student unions. In the early hours of November 17, a tank crashed the gate of the university's building, killing 24 people and injuring 1,000 more. Hundreds of students have been arrested. Despite the fact that the uprising was suppressed, it led to mass protests which resulted in the end of the dictatorship in the country.

The uprising anniversaries are widely celebrated in Greece every year. The participants of processions traditionally head for the US Embassy, which does nor work on that day, protesting against the US support of the Greek military junta of 1967-1974.