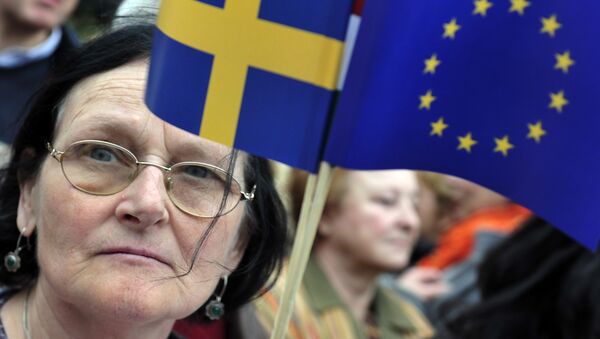 Swedes' support for the European Union continues to grow, a recent poll has suggested. However, a Sweden Democrat MEP questioned the poll's results as "fake news."

Ever since joining the EU, Swedes have been stalwart supporters of the union, never hesitating about their membership. A recent survey conducted by pollster Sifo on behalf of the national broadcaster SVT before the EU summit in Gothenburg has indicated a growing solidarity with Brussels.

If a referendum on joining the EU were held today, only 25 percent of Swedes would have voted no, as opposed to 55 percent of EU supporters. This marks a drop compared with last year's results, when 31 percent said they would have voted against the EU. The support for EU membership peaked among Green Party voters (84 percent). When asked whether a new referendum was needed altogether, only 21 percent of Swedes answered affirmatively (again, down from 30 percent last year).

'Non-Aligned' Sweden Joins Fledgling European Military Alliance
However, resistance to the EU remains strong outside metropolitan regions, which have traditionally been most pro-European. The support for a new referendum was highest among the Sweden Democrats (SD) voters, 60 percent of whom would gladly see a new plebiscite. Women were found to be more welcoming of the EU than men, whereas the young were more skeptical than the elderly.

"The marked difference is that SD voters have continued to increase both their skepticism to EU membership and their willingness to organize a new referendum," Sifo analyst Jonathan Wennö told SVT. He ascribed Swedes' reinforced growing loyalty to the EU to the Brexit aftermath and the EU's firm belief in a supranational solution to the climate crisis.

SD (Sweden Democrat) member of the European Parliament Peter Lundgren, however, was skeptical about the accuracy of the survey.

"This is what I call 'fake news,' because your answers depend on the way you ask. I don't trust the survey, and the same goes for SVT," Peter Lundgren told SVT.

The Sweden Democrats have long distinguished themselves from the rest of the Swedish political arena, being in effect the nation's only EU-skeptical party.

"Our voters are most critical because, I believe, we keep them posted on all poor decisions and the lack of democracy, which no other party dies," Lundgren said.

Lundgren, a former truck driver, is the Sweden Democrats international secretary and is considered Nigel Farage's right hand in the EU group Freedom and Direct Democracy in Europe (EFDD). Lundgren is adamant that Sweden would be better off without the EU.

"The way things are now, I believe that be must at least re-negotiate our membership and when it is done, I want the Swedish people to take a stand and decide," Lundgren said.

Swedes Remain Stalwart Anti-Euro EU-Supporters
Sweden joined the EU following the 1994 referendum, where a slim majority (52.3 percent vs. 46.8 percent) voted in favor of EU accession. The referendum went down in the nation's history as one of the most polarizing, as the Nordic nation was literally split in half, southerners backing the EU and northerners supporting independence. This division has largely been preserved, with anti-EU sentiment seething in northern and rural Sweden and urban areas being bastions of EU loyalty.

The organization Nej till EU (No to EU), founded in the 1990s, remains active today and is promoting a new EU referendum and, eventually, Swexit.

"The EU is not a project where we can pick and choose among the rules and obligations that apply." — PM on #EUvalues pic.twitter.com/lMGsWhjS6S