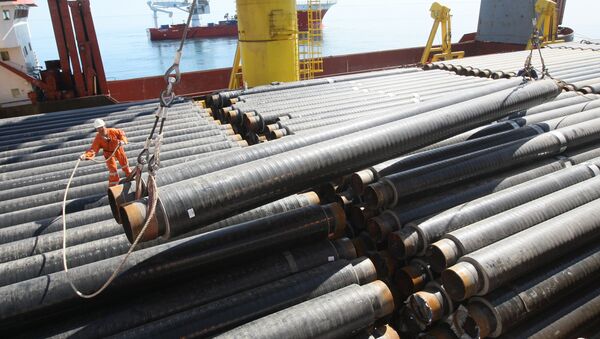 "We are about to sign our first contract on gas field exploration on the shelf with the participation of Russian companies. We are now seeing an attempt to make Lebanon leave this positive path," Geral Bassil said.

"A campaign to scare Lebanon, to create obstacles in its path with the use of terrorist forces under different pretexts is underway," the minister said, adding that "the campaign against Lebanon is being carried out by the same forces that support terrorists in Syria."

At the same time, according to Bassil, Lebanon wanted to preserve good relations with Saudi Arabia despite the surprise resignation of Lebanese Prime Minister Saad Hariri.

"We never took any diplomatic steps that would escalate the situation," Bassil said.

Top diplomat said that "some parties" to the conflict were trying to displace the head of the country from his office, adding that he expected Hariri to return to the country following his visit to France.

"We hope that Russia will continue building up its influence in the Middle East in order to form a balance of powers in the region," Bassil added.

According to the minister, Beirut will respond to any attempt of interference in its internal affairs, stressing that the country's sovereignty cannot be "bought and sold."

For his part, Russian Foreign Minister Sergei Lavrov said "we are interested in Lebanon being safe and with the effective participation of all branches of power. And the most important thing, we support the resolution of all urgent issues by the Lebanese themselves without any external interference."

Previously, Moscow has voiced concern over the shock resignation of former Prime Minister Saad Hariri and urged all external forces that could influence the situation in Lebanon to show restraint and constructive approaches.

The situation in Lebanon escalated two weeks ago when then-Prime Minister Saad Hariri announced his resignation in a video address made from Saudi Arabia. The former minister expressed fears that he could be assassinated, like his father, in Lebanon, as well as accusing Tehran and the Iranian-backed Hezbollah movement of alleged attempts to destabilize the situation in the country and the Middle East, a claim strongly denied by the Islamic Republic as groundless.

While Lebanese President Michel Aoun has been accusing Saudi Arabia of holding Hariri and his family, Riyadh has strongly denied the claims as "groundless." Hariri himself has repeatedly reiterated his intention to return to Lebanon in the next few days after his planned trip to France at the invitation of President Emmanuel Macron, saying that he is "perfectly fine."