What a Prick! Iceland Welcomes Its First Hedgehog 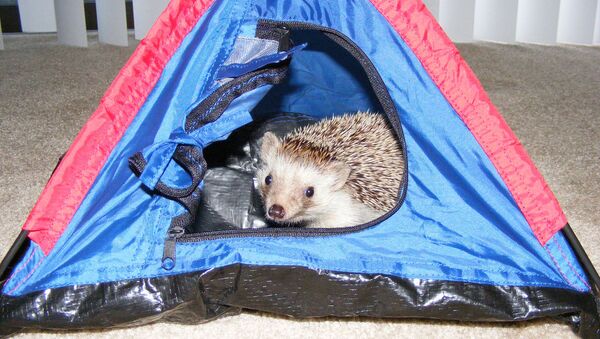 The island nation of Iceland, whose flora and fauna have always been severely limited, has recently greeted the first hedgehog on its soil.

Bernie the African hedgehog has become a trailblazer of his species after being imported to Iceland by his owners.

Tekla Fekete has had Bernie since 2015. Her father Péter Zsolt first applied to have him imported in May 2016, yet the application was rejected. The Icelandic authorities, however, pointed out that the proud hedgehog owners could apply for an exception if they handed in an extensive risk assessment report to Iceland's Environmental Agency, which assesses biological hazards.

Iceland Stuns Road Hogs With Trippy 3D Crosswalk
Since Péter Zsolt has been working with animal research for years, this proved to be an easy task for hhim. After tests of his physical condition, Bernie was effectively flown to Iceland, where he had to stay in quarantine for four weeks before reuniting with his family, the local news outlet Iceland Monitor reported.

Iceland has had a long and complicated history with pets. In 1924, the city of Reykjavik banned dogs altogether. Although the ban has since been repealed, its aftereffects persist. Dogs are still fairly uncommon, as Icelanders themselves clearly prefer fluffy pets that purr.

Traveling to Iceland with a pet (even if it's a cat) may be quite complicated, which is why many are advised to abstain from this idea, due to an intricate process that includes many forms, an import fee and several weeks of quarantine.

Meanwhile, owning hedgehogs as pets has become a recent trend in northern Europe. Across Scandinavia, many forums for hedgehog owners have emerged for users sharing tips and pictures of their companions. Hedgehogs are seen as a particularly attractive alternative for people allergic to fur.

Today, tame hedgehogs exist on the market, which spares aficionados the necessity of having to catch one in the woods. Hedgehogs are likely to have a price tag of $250-$500, depending on color, species and gender, females generally being more expensive.

​Hedgehogs are nocturnal animals. The European variety is known to hibernate in winter, unlike its African counterpart.