Ancient Skull From China Could Rewrite History of Human Evolution 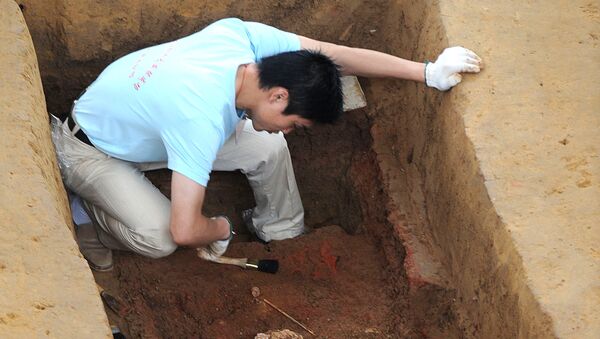 A 260,000-year-old skull known as the Dali skull was discovered 40 years ago in China’s Shaanxi province. However, its analysis may force people to rewrite history.

Most scientists believe that Homo sapiens arose in Africa around 200,000 years ago based on fossil evidence from the continent. The DNA analysis of modern humans points to evidence of humans migrating from Africa and spreading across the globe some 120,000 years ago.

However, a new analysis by experts at Texas A&M University in College Station and the Chinese Academy of Sciences in Beijing found that the Dali skull is astonishingly similar to two separate Homo sapien skulls previously found in Morocco.

“I really wasn’t expecting that. I think gene flow could have been multi directional, so some of the traits seen in Europe or Africa could have originated in Asia,” scientist Sheela Athreya told the New Scientist.

Is It Alien? Ancient Toddler's Skeleton With Extended Skull Found in Crimea
The facial structure and brain case of the Dali skull are intact, despite dating to around 260,000 years ago. It is so old that archaeologists didn’t believe it could share features with modern Homo sapiens when they discovered it.

But the striking physical similarities point to the fact that the skulls found in Morocco and the one found in China share DNA with Homo sapiens.

This suggests that modern humans aren't exclusively descendants of Africans. Small groups of them may have migrated to Eurasia more than 200,000 years ago. From there, some of the Asian ancestors possibly moved back to Africa, where they mixed together with the native populations.