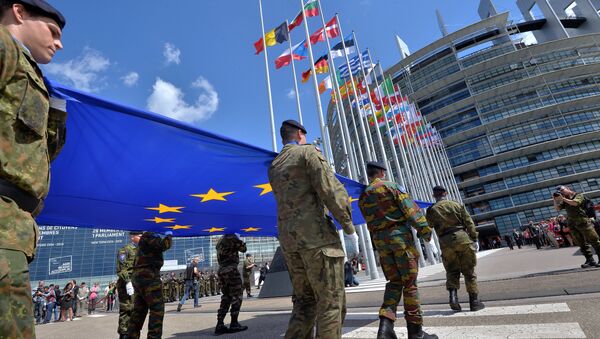 There is no such thing as “EU patriotism” and a European army will not become an efficient force because EU countries have different political priorities and no common cause to fight for, Czech military analyst Martin Koller has told Sputnik.

On November 13, the defense ministers of 23 EU countries signed a joint defense cooperation pact in Brussels. It is meant to allow EU member states to jointly develop defense capabilities, enhance operational readiness and contribution of their armed forces.

UK Lawmaker Regards Possibility of EU Army Creation as 'Disaster'
“A European army is good in hauling around cargo, but this does not mean it will become combat-worthy. What interests can a Portuguese soldier possibly have in the Czech Republic, and the other way around? The EU is divided along language and ethnic lines and, more importantly, it has different interests,” Koller said.

He added that worried as it is about a possible armed conflict on the Russian border, the EU still lacks a war-ready professional armed force.

“Besides, there is no such thing as European patriotism. What will these soldiers fight for? They will be just mercenaries, who always fight for money, not to have monuments erected on their graves,” Koller noted.

He said that Czech Defense Minister Martin Stropnicky’s decision to subordinate half of the country’s land forces to the German 10th Armored Division “will be the end of our country and will create an armed force to be used as an instrument of repression against its own citizens. This is the bottom line of this new system because, from a military-strategic standpoint, a European army has no future.”

Meanwhile, NATO leaders make no secret of their intention to use a future EU army as a deterrent against Russia, Sputnik Czech wrote.

Russia’s Foreign Minister Sergei Lavrov believes that NATO is using every opportunity available to deploy as many of its soldiers along the Russian border as it possibly can.

“Lavrov is right because NATO is 70 percent doing America’s bidding and has long ceased to fulfill its duty to defend Europe. Its main objective was defending Europe against the Warsaw Pact, which is no longer in existence. Secondly, in its standoff with Russia, the US will naturally opt for solutions where Europe will suffer the main casualties and America will emerge in a stronger position vis-à-vis the European countries,” Martin Koller continued.

“I still hope that all the talk about a military conflict with Russia will remain just talk,” he emphasized.

Britain, Denmark, Portugal, Ireland and Malta have not yet decided whether to join the pact.