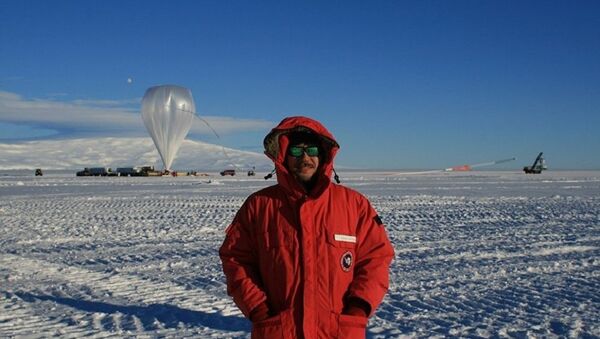 © Photo : From Alexander Novikov personal archive
Subscribe
Alexander Novikov, senior researcher at the National Research Nuclear University MEPhI, explained to RIA Novosti why Russian researchers and their colleagues at NASA travel to Antarctica every year to launch unusual “hot-air balloons,” and shared his experiences living near the South Pole.

Every year researchers from the University of Hawaii, NASA, National Research Nuclear University MEPhI and many other research centers around the world, set off for unusual expeditions to the McMurdo station in Antarctica, during which they do what seems very odd. The researchers send scientific balloons loaded with the latest high-tech equipment into the cold polar air, and let them float around for the next three to four months.

These "balloons" are, in fact, searching for one thing: ultra-high-energy neutrinos, traces of the Universe's most powerful explosions and cataclysms, taking place in centers of galaxies, nearby supermassive black holes and other corners of the Universe, the nature of which remains a matter for dispute among astronomers.

"In fact, hot-air balloons are far from something outdated or archaic. Modern balloons can regulate their altitudes, go up or down at different times of the day, and do many other things as well. They have an advantage over satellites, because each balloon can be re-launched many times, and that significantly reduces the cost of research," the physicist explained. 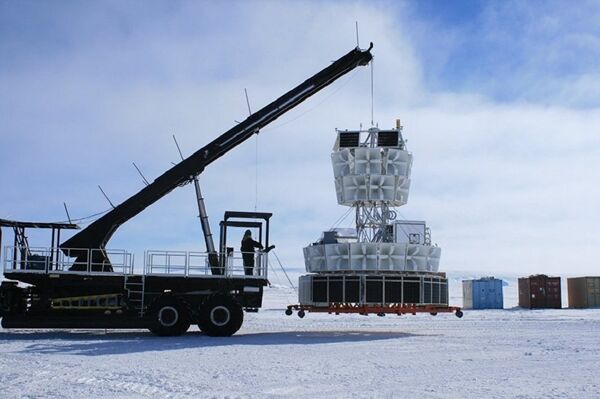 Moreover, hot-air balloons can transmit and receive a much higher volume of data than satellites, the researcher added. That and a range of other advantages led the ANITA (Antarctic Impulse Transient Antenna) project's scientific team to choose this "legacy of the 19th century" as a basic platform for a range of detectors created in the US and at the National Research Nuclear University MEPhI.

American researchers participating in the ANITA project have been searching for these neutrinos for ten years now, but haven't found any of the particles. However, that doesn't seem to be a problem yet, since a similar project — the high elevation Auger Telescope — has managed to detect two or three dozen of the ultra-high energy cosmic rays during decades of continuous operation.

While neutrinos are commonly produced by the Sun and other stars, researchers believe that the ultra-high energy neutrinos are produced during extremely unusual processes, such as the disintegration of dark matter particles. The goal of this research is to explain the nature of these processes. These particles are so rare that physicists had to turn the entire Antarctic into an enormous neutrino detector, Novikov said.

Antarctica on the line

"The probability of discovering these particles depends on two factors: a detector's total area and how long it has been operating. In our case, we have turned the very ice in the Antarctica into a detector. Similar land detectors have already been created, such as ARIANA and ARA. They can operate 24/7, but can only register events taking place a very short distance from them. The balloons, however, allow us to observe almost the entire continent and register events taking place hundreds of kilometers away from them," Novikov explained.

How does this natural detector work? It is based on a very interesting effect, which was predicted back in 1962 by Soviet theoretical physicist Gurgen Askaryan. He suggested that ultra-high energy neutrinos will not conform to the laws of physics when traveling through high-density materials that do not conduct electric current, such as ice or salt, where these particles travel faster than light.

As a rule, this speed, that exceeds the speed of light, causes flashes of light to appear, known as Vavilov-Cherenkov radiation. In the case of ultra-high energy neutrinos, however, this process will cause the emersion of radio- and microwave beams with peculiar properties. Apart from science bases, there are no other sources of radio emissions in Antarctica. This allows researchers to detect traces of neutrinos traveling through the ice with powerful radio antennas that operate similar to ordinary radiotelescopes.

As the ANITA project expanded, the size of these antennas grew. The current, fourth version of the detector is a massive set of radio receiving units, which is seven meters tall, and weighs several hundred kilograms. This set of antennae is lifted by a hot-air balloon to an altitude of 37 kilometers, where it can receive data from almost all over the continent, Novikov explained.

The first launches of these antennas, which took place before the Russian scientists joined the project, showed that the radio signals received contained interference since the surface of the Antarctic is not perfectly flat. This interference had to be compensated for somehow in order to at least try to discover neutrinos in the data collected by ANITA, the researcher explained.

The Russian-American team of researchers headed by David Besson, professor at MEPhI and the University of Kansas, found an extraordinary solution to the problem. When experimenting with various sources of radio signals, researchers suddenly discovered a simple and efficient way to solve the problem their colleagues faced at ANITA.

As it turned out, the interference could be removed from the data by sending a special periodic signal over the surface of the Antarctic. This signal could be generated with a simple electric gas lighter, which generates electric sparks upon the deformation of a piezo-element. The researchers had to launch two more balloons after ANITA within a small distance to orientate the signals using the photomultipliers created in the Besson Laboratory at MEPhI.

"We are currently working at MEPhI to create the third version of a signal calibration system, Hi-Cal-3, that would not require piezo-elements. Unlike hot-air balloons, these elements could truly be called a legacy of the previous century. In fact, they are no different from the lighters we use when we go camping, and they are used in similar conditions, too, except it is not a person who pushes the button, but an actuator. On the other hand, these "lighters" have worked out great; we have not found a proper replacement yet," the physicist said.

ANITA's final session began last December and ended this spring. Russian and American researchers went to the balloons, deflated them, and took the hard drives. They left the antenna equipment and the balloons themselves.

The researchers had to leave the balloons and equipment, because they weighed several tons, Novikov explained. They can only be transported by plane, and landing a plane during the polar night is extremely difficult and dangerous.

The researchers place great hopes on the new data, which, as Novikov noted, could prove that the Standard Model of physics describes the behavior of ultra-high energy neutrinos incorrectly, or, the opposite, could prove it right.

"We don't have this kind of data yet, but we have not processed all the data collected during the balloons' last flight. We have not found traces of ultra-high energy neutrinos, but our detectors recorded 14 other types of cosmic rays passing through the atmosphere. We hope that the data collected during the 2014 and 2016 expeditions will help us discover at least some of these neutrinos and test the Standard Model," Novikov said.

The discovery of ultra-high energy neutrinos will allow researchers to start searching for the sources of these mysterious particles, and also present the Earth with a "free," constantly operating particle accelerator, that will allow scientists to accelerate particles to speeds and energy that are far beyond the capabilities of the Large Hadron Collider and even colliders of the future, Novikov added. 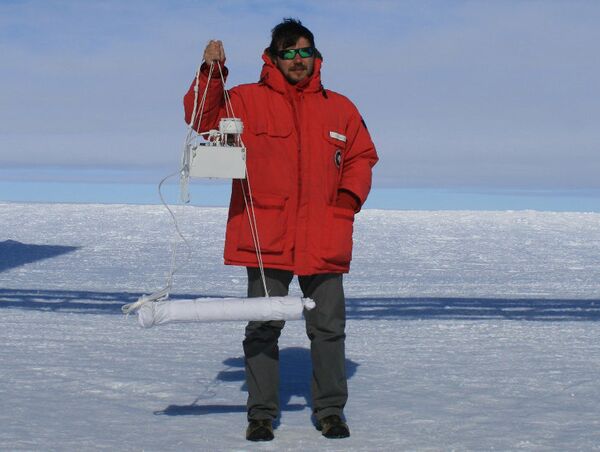 At the end of November, the Russian physicist is planning to return to Antarctica, where the ANITA research team will set off for another expedition to the balloons. This time the researchers will take the balloons to the "mainland" and prepare them for the next flight. This seemingly easy process is, in fact, complicated with serious challenges and problems unique to this region.

"Working with electronics in the Antarctica is not particularly pleasant and plain dangerous because of the zero humidity dominating most of the region. Touching almost any metal or surface, you almost always get a static electricity shock. You have to be careful when working with microcircuits and chips," Novikov explained.

During the balloon launching phase, the researchers had more trouble with static electricity than with weather conditions and the cold. Now, however, they are to set off for an expedition to the area near the pole, where the antennas and balloon cylinders are, and where weather conditions will be more challenging.

The new data and the re-launches of ANITA, Novikov hopes, will allow researchers to solve one of the most interesting and most complicated mysteries in space, and shed light on the origin of the Universe, through the observation of particles that could have been travelling towards the Earth for billions of years.