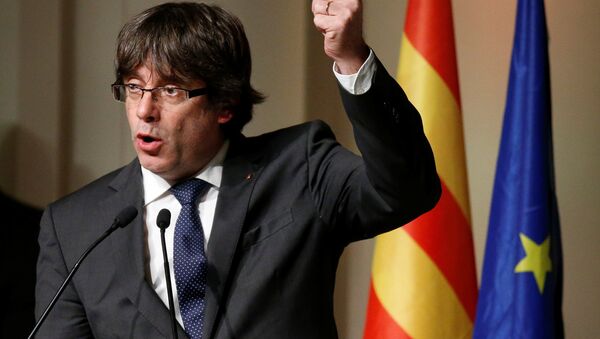 © REUTERS / Pascal Rossignol
Subscribe
The Spanish state broadcaster has been asked to explain by the country's TV watchdog why it accompanies a clip of ousted Catalan leader Carles Puigdemont with creepy music. The use of the theme from The Exorcist produced a lively reaction on social media.

In the clip Mr. Puigdemont was saying he was aware he might go to jail over his support for independence.

In @rtve they will have thought that Puigdemont produces more fear with the music of the EXORCIST in the background.
This is what has been @informesemanal:

RTVE's professional standards council said it was bad practice and has launched an investigation into why the music was chosen and whether a negative inference was intended.

Perhaps the exorcist is President Puigdemont to exorcise the phantom of Franco who still haunts Spanish democracy. pic.twitter.com/WkxvqCqaew

There was plenty of criticism on Twitter for the choice of music but others found it amusing.

@JulianAssange National Spanish TV plays 'The Exorcist' tune while Puigdemont talks to manipulate spaniards into hating secessionists. Can they get more ridiculous and infantile? https://t.co/wLPO6wKzpg

Informe Semanal has been running since 1973, ironically the same year The Exorcist came out in the cinemas.

It was launched while Spain was still under the rule of the dictator Francisco Franco, and many Catalan nationalists have accused RTE in recent months of reverting back to supporting his nationalist and fascist stance over the Catalonia issue.

​Mr. Puigdemont held a referendum and then declared the region, based around Barcelona, independent.

Mr. Rajoy's party, the Partido Popular (People's Party), was formed in 1989 by a merger of several right-wing parties, many of whom included supporters of the Franco regime.

One of Top 10 Scariest Songs

The Exorcist tells the story of a teenage girl in the United States who is possessed by a demonic spirit and has to be exorcised by a Roman Catholic priest.

In a Rolling Stone poll last year Tubular Bells was named among the top 10 scariest songs.