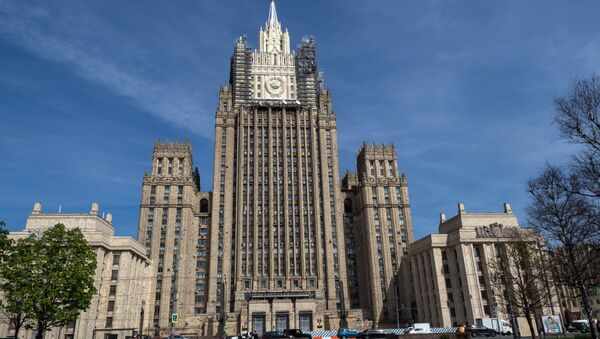 © Sputnik / Vladimir Pesnya
/
Go to the photo bank
Subscribe
In a major foreign policy speech at the Lord Mayor's Banquet at Mansion House in London late on Monday, May accused Russia of meddling in other states' affairs, spreading "fake stories" in media, aggressive policies "to sow discord in the West" and promised to protect West's interests if Russia continues on its current "path."

"Moscow has paid attention to the statements of UK Prime Minister Theresa May regarding Russia, which were made during the Lord Mayor's Banquet on November 13. This time our country is placed not at the same level as other challenges, but at the first place on the scale of ‘threats to global society’ … The theses are not new, but united by the same irresponsible and groundless nature of accusations made against Russia," the Russian Foreign Ministry said in a statement on Tuesday.

The ministry's spokeswoman, Maria Zakharova, noted that the United Kingdom was also seeking a global leadership in the issue of deterring Russia, which was rather cynical considering the country’s aggressive actions in Iraq and Libya.

The idea of protecting the international order, voiced by the UK Cabinet’s head, sounds particularly cynical. One should just remember the aggressive actions of the United Kingdom in Iraq and Libya, which led not to the strengthening of international laws, but to causalities and suffers from millions of people and destabilizations of entire regions. Nevertheless, London demonstrates a fundamental misunderstanding of global processes and the idea of the international legal order itself, based upon the UN Charter, which the United Kingdom vows to protect," Zakharova stressed. 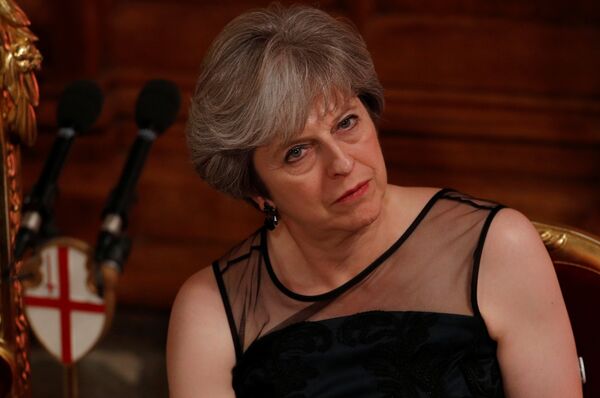 Britain's Prime Minister Theresa May listens to a speech at the Lord Mayor's Banquet at the Guildhall, in London, Britain November 13, 2017.
© REUTERS / Peter Nicholls

According to the spokeswoman, the UK society is going through difficult times due to the country’s withdrawal from the European Union and internal split on the issue.

"It is quite understandable that an external enemy, with Russia chosen for this role, is needed for the distraction of the public opinion. It is rather regrettable, especially given that pragmatic and efficient global policy would better correspond to the country’s ambition to turn into ‘Global Britain.’ Such course would have given the United Kingdom new opportunities on rapidly growing markets, strengthened its positions in the world through enhancing dialogue with other countries. The path of confrontations chosen by London would not contribute to achieving these goals," Zakharova said.

Russia has repeatedly refuted accusations of attempts to influence the election or political processes in different countries, with Kremlin spokesman Dmitry Peskov calling the claims "absolutely groundless." Commenting on the alleged Russia’s interference in the US, French and German elections, as well as Brexit referendum in the United Kingdom, Russian Foreign Minister Sergey Lavrov stressed that there was no evidence proving the claims.

000000
Popular comments
maybe this speech can be seen as damage control for her prime ministership? Otherwise she is just blowing hot air.
michael
14 November 2017, 22:20 GMT1
000000
I'm not sure that Zakharova really understands the accusations made by May against Russia. May accuses Russia of being independent of the west. May accuses Russia of preventing the slow, "Cross the ocean in broad daylight" strategy of world conquest that the west is implementing a la Hitler, the latest country under attack and occupation by the west and its criminal 70 others being Syria, May accuses Russia of rising again from the Yeltsin-US collusion (if you;re looking for a country installing a president to destroy his own country, look at the US-Yeltsin collusion), May accuses Russia of not collapsing under western sanctions against the Russian people, but rather using the sanctions to their advantage. May accuses Russia of not stepping aside so the west could carry out a crimean genocide. May accuses Russia of slowing down and making difficult the west's genocide of Southeast Ukrainian people. May accuses Russia of legally entering the western war on Syria which has led to the collapse of the west's islamic states terror army. May accuses Russia of being composed of humanity. .....of course Russia will continue on this path. The west (UK, US, all the member countries of the criminal, international law-breaking coalition) should do what they think they should do.
gbiyanju
15 November 2017, 10:38 GMT
000000
Newsfeed
0
New firstOld first
loader
LIVE
Заголовок открываемого материала
Access to the chat has been blocked for violating the rules . You will be able to participate again through:∞. If you do not agree with the blocking, please use the feedback form
The discussion is closed. You can participate in the discussion within 24 hours after the publication of the article.
To participate in the discussion
log in or register
loader
Chats
Заголовок открываемого материала
Worldwide
InternationalEnglishEnglishMundoEspañolSpanish
Europe
DeutschlandDeutschGermanFranceFrançaisFrenchΕλλάδαΕλληνικάGreekItaliaItalianoItalianČeská republikaČeštinaCzechPolskaPolskiPolishСрбиjаСрпскиSerbianLatvijaLatviešuLatvianLietuvaLietuviųLithuanianMoldovaMoldoveneascăMoldavianБеларусьБеларускiBelarusian
Transcaucasia
ԱրմենիաՀայերենArmenianАҧсныАҧсышәалаAbkhazХуссар ИрыстонИронауОssetianსაქართველოქართულიGeorgianAzərbaycanАzərbaycancaAzerbaijani
Middle East
Sputnik عربيArabicArabicTürkiyeTürkçeTurkishSputnik ایرانPersianPersianSputnik افغانستانDariDari
Central Asia
ҚазақстанҚазақ тіліKazakhКыргызстанКыргызчаKyrgyzOʻzbekistonЎзбекчаUzbekТоҷикистонТоҷикӣTajik
East & Southeast Asia
Việt NamTiếng ViệtVietnamese日本日本語Japanese俄罗斯卫星通讯社中文（简体）Chinese (simplified)俄罗斯卫星通讯社中文（繁体）Chinese (traditional)
South America
BrasilPortuguêsPortuguese
NewsfeedBreaking
22:38 GMTAlternative for Germany to Continue Supporting Nord Stream 2 After Election - Co-Chairman
22:01 GMTMilitants in Aleppo Tried to Force Way From Turkish-Controlled Area - Russian Military
21:48 GMTGermans See No Use to Vote for CDU Without Merkel at Helm - Afd Politician
21:19 GMTGerman Conservatives Suffer Catastrophic Defeat in General Election – Senior Official
21:00 GMTGermany's FDP Leader Hints at Coalition Talks With Greens
20:45 GMTMacron Files Complaint Against Paparazzi for Invasion of Privacy - Reports
20:16 GMTTwitter Removes Blue Verified Badge From Accounts of Several Afghan Ministries - Reports
20:00 GMTLaschet, Scholz Want Coalition Talks to End by Christmas
19:41 GMTCIA Was Ready to Start Firefight in London to Prevent Russia From Busting Out Assange, Media Claims
19:20 GMTSuicide Pact? Top Labour Remainer Says Party Should Campaign to Rejoin EU
18:58 GMTVideo: Miss France 2019 Confronted by 'Teenage Gang' That Threw Stones at Her in Paris
18:47 GMTFree For All! Enraged Moped Drivers Fight in London Amid Lack of Fuel - Video
18:39 GMTPSG's Kylian Mbappe Caught on Camera 'Lamenting Neymar Would Not Give Him Passes'
18:35 GMTPowerful 5.7-Magnitude Earthquake Hits Philippines' Largest Island Luzon
18:00 GMTInfrastructure Plan: Pelosi Says She 'Never' Brings a Bill to Floor 'That Doesn't Have the Votes'
17:43 GMTUsyk vs. Fury? Gypsy King's Twitter Like Leaves Fans Buzzing About Possible Heavyweight Clash
16:50 GMTLabour Leader Demands Visas For 100K Foreign Lorry Drivers Amid Global Shortage
16:33 GMTLabour Staff Cuts That Prompted Strike Ballot Due to £2m-a-Year Legal Costs
16:23 GMTDHS Chief Reveals Up to 12,000 Haitians Who Crossed Southern Border Were Released Into US
16:21 GMTTurkey Wants US Military to Leave Syria, Iraq After Afghanistan Withdrawal, Erdogan Says