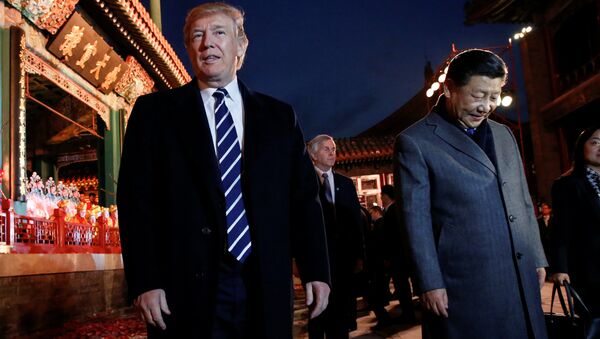 © REUTERS / Jonathan Ernst
Subscribe
While the US and China have inked deals worth $253 billion, Chinese President Xi Jinping and his American counterpart Donald Trump's views on free trade differ significantly. Due to their trade ties the countries remain interdependent, however, US Congress seeks to curtail China's efforts to buy American hi-tech companies, analysts told Sputnik.

It appears that the roundly-lauded US political system is putting obstacles in the way of US-Chinese relations, Viktor Supyan, deputy director of the US and Canada Institute in Moscow, told Sputnik China.

The scholar emphasized that when US President Donald Trump arrived to Beijing seeking to ink lucrative deals with his Chinese counterpart Xi Jinping, US congressmen stepped up with a new legislation that would toughen US foreign investment rules to curtail Chinese efforts to purchase American high-tech companies by expanding the powers of the Committee on Foreign Investment in the United States (CFIUS).

"There are two processes which are developing in parallel," Supyan said. "The difference in the approaches of the two branches of American government is being manifested in the US in almost every issue. This applies not only to China, but also to other states, and not only to trade, but also to other matters."

According to the scholar, "the system of checks and balances, which the US is so proud of, is languishing."

On the one hand, China plays an important role for the United States, Supyan noted, referring to the countries' trade ties. "On the other hand, the Americans believe, that it is necessary to do something to ensure that China respects trade rules and intellectual property rights, which [the Chinese] are violating from the US point of view."

Trump: Talks With Xi Jingping - 'Productive', Previous US Officials - 'Clueless'
Bian Yongzu, an analyst at the Center for Financial Studies at China's National University, drew attention to the fact that Trump and Xi signed deals worth $253 billion, dubbing the agreements reached in the energy sphere "the most important."

"The US is an exporter of energy resources and their share in America's commodity export has been steadily growing. China, for its part, is a country that imports energy resources. In this sense, the countries are relatively interdependent," Bian pointed out.

According to the analyst, the crux of the matter is that energy resources are dwindling. Besides, the pollution of the country's atmosphere due to the use of coal poses a serious challenge to Beijing.

"China has focused on the priority of using natural gas and oil," he said, adding that in this particular sphere China is collaborating with other countries, including the Russian Federation.

Despite Bold Rhetoric, Tame Trump Stays ‘on Script' in Asia - Analyst
One of the energy deals regulates cooperation between Chinese petrochemical company Sinopec Group, ArcLight Capital, the Boston-based private equity firm and US commodities trader Freepoint Commodities in Texas: the three companies are planning to build a 700-mile pipeline to transfer shale oil from the Permian basin in Texas to the US Gulf Coast.

The other energy agreement envisages Sinopec exploring for natural gas jointly with the US in Alaska. As South China Morning Post reported, China Investment Corp and Bank of China will offer finance support to accomplish the project worth $43 billion.

According to Sputnik China, sources close to the Sino-American talks note that Washington is most interested in selling growing volumes of liquefied natural gas (LNG) in order to reduce the US trade balance deficit.

Speaking at the joint press conference on November 9, the Chinese president underscored that "for China and the United States, win-win cooperation is the only right choice and the pathway toward a better future" and added that "according to China's timetable and roadmap for opening up, [Beijing] has announced a number of steps to promote market access."

Trump at Talks With China's Xi: 'I Believe There's Solution' to N Korea Crisis
Following his meeting with the US president, Xi reiterated Beijing's commitment to the policy of "openness" at the Asia-Pacific Economic Cooperation (APEC) summit in Da Nang, Vietnam, on November 10.

"We should continue to foster an open economy that benefits all," Xi said. "Openness brings progress while self-seclusion leaves one behind."

He also pledged that China "will not slow its steps in opening up itself."

On the same day Chinese Vice Finance Minister Zhu Guangyao announced that Beijing will stick to a more open-market policy, easing restrictions imposed on the share of foreign ownership in China's financial companies.

"China has made a decision to ease the limitations related to the share of foreign investors in companies' managing foundations, securities and specializing in the futures trade up to 51 percent," Zhu said. "After the approval the new limitations will be in effect for three years and after this period they will be lifted and the share of investments will not be limited anymore."

Commenting on the APEC meeting, Reuters pointed out that the visions of Chinese and US leaders significantly differ. While Xi is positioning China as a proponent of openness and globalization, Trump continues to push ahead with the protectionist "America First" agenda.