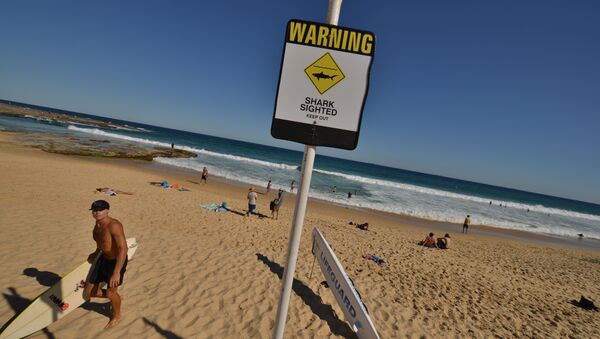 © AFP 2021 / PETER PARKS
Subscribe
Charlie Fry, a British doctor who has been living in Australia for two months, was able to escape a shark while surfing on Monday by just hitting it in the face.

"I saw a shark’s head come out of the water, with its teeth, and I just punched it in the face," he described his terrifying experience to Australian 9News network.

“I saw a shark’s head come out of the water… and I just punched it in the face," Charlie Fry has told #9News, after he was attacked on the NSW Central Coast. https://t.co/YK830EQ5gR pic.twitter.com/n2a5C2ygXs

​The doctor, who had only been surfing for a couple of months, was then able to return to the beach on his board.  He shouted out to his three friends who were there with him, and then managed to "catch a wave in."

"It was just pure adrenaline, I genuinely thought I was going to die, like 'you’re about to be eaten alive by a shark', so everything slowed down, like 'get on your board and surf'," Fry confessed.

Social Media News: A 25-year-old British man escaped from a shark after “punching it in the face” while surfing in Australia, saying his feat was inspired by professional surfer Mick Fanning. Charlie Fry, a doctor who moved to Australia two months ago to… https://t.co/PBBJMTWTqG

​The shark, which he described as being about 2 meters long, left scratches and a small puncture wound on his arm.

According to the surfer, two of his three friends were doctors and took good care of him before accompanying him to Gosford Hospital.

Charlie Fry, who is 25 and is working as a doctor in the Emergency Department at a Wyong hospital, said that he was inspired by surfer Mick Fanning, who fended off a shark during a competition in 2015.

The council authorities said that they closed the beach on Tuesday, after a helicopter rescue service photographed what it described as a bronze whaler shark nearby shortly afterwards.