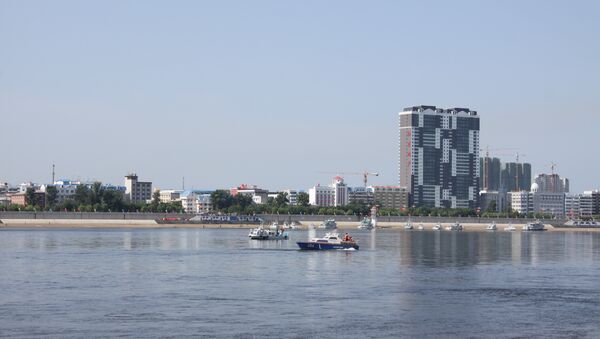 © Sputnik / Svetlana Mayorova
Subscribe
International
India
Africa
According to the Xinhua news agency, the project is aimed at promoting bilateral tourism and easing border crossing between the two countries.

BEIJING (Sputnik) — Construction of the first passenger cableway between Russia and China over the Amur River is set to start in Spring 2018, local media reported Tuesday citing the Chinese investor. ​The cableway will connect China’s Heihe, known in Russia as the Amur River, and the Russian city of Blagoveshchensk. The Chinese side's investmenst is estimated is worth $120 million.

China and #Russia will build a #cableway across river on their shared #border to promote tourism and facilitate border crossing between the two countries, the Chinese investor announced Tuesday. https://t.co/gXxuwnVMi6 pic.twitter.com/AbYQEDRpG4

"The cableway will make border crossings between the two countries more convenient and will also become a tourist attraction on the river," said Li Bo, deputy head of customs bureau in Heihe.

Meanwhile, last December, the construction of a bridge between Blagoveshchensk and Heihe began on the Russian side. Russia and China are also building another bridge across the Amur River, between the city of Tongjiang in China's Heilongjiang Province and Nizhneleninskoye in Russia’s Jewish Autonomous Region.