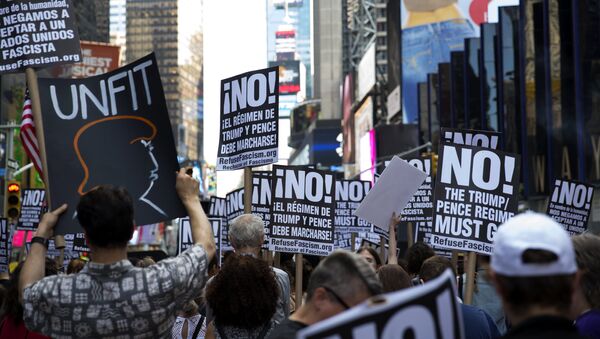 © Sputnik / Caitlin Ochs
/
Go to the photo bank
Subscribe
Trials for some of the roughly 230 people arrested during an anti-capitalist, anti-fascist protest on Donald Trump’s Inauguration Day will begin in the coming weeks and months.

By bringing so many protesters to trial, the US government is trying to make an example of them, DC organizer and legal activist Sam Menefee-Libbey told Radio Sputnik's By Any Means Necessary.

The fact that more than 190 of the protestors are going to trial, when 95 percent of indictments in the US typically lead to plea agreements, is highly unusual and is a huge departure from normal legal proceedings. And by charging many of the protesters with conspiracy and refusing to offer most of them plea bargains, the government is trying to force protesters facing shocking prison terms into situations where they may have to testify against co-defendants, he told hosts Eugene Puryear and Sean Blackmon.

Menefee-Libbey called attempts to set the legal code against anti-government activists a form of political persecution aimed to suppress resistance, and the "legal twists and turns" the government has taken over the past 10 months when it comes to these protesters reveals the corruption within the US legal system, he said.

"On the inauguration, there were dozens of autonomous actions resisting the inauguration and protesting against the racist, sexist, homophobic, imperialist, money-grubbing a**hole that Donald Trump is. As part of that there was the anti-capitalist, anti-fascist march that was met with a lot of resistance from the DC Police Department," Menefee-Libbey explained.

"Over 230 people were kettled and arrested before and after being repeatedly exposed to chemical weapons," he added. After having tear gas canisters fired at them, more than 200 people were charged with felony rioting, which carries a maximum 10-year prison sentence. Some of the protesters are also facing felony conspiracy charges with prison sentences of up to 70 years. Although a superseding indictment resulted in charges being dropped for journalists or legal observers, many of the protesters have been charged with eight felonies each.

On November 1, a judge noted that two of the felonies that people were charged with do not actually exist as felonies in the criminal code, but were actually misdemeanors, reducing the sentence of those people from 51 years in prison to eight.

Two groups of seven defendants are to go to trial before the end of the year: one group on November 15, the other on December 11, he said. But even with those trials scheduled, the legal chicanery continues.

"At the trial readiness hearing for the December 11 trial, the prosecutor revealed that they had decided only to proceed with three misdemeanor counts rather than than the six felonies and two misdemeanors that everyone had traveled to DC to appear in court for. I think this sort of [change] attests to how wild the prosecutor's' legal theory is," Menefee-Libbey said. This development is very new, he added, and so far only applies to those seven defendants.

Protesters are accused of throwing objects at people and businesses, and during the protests, some vehicles and storefronts were damaged. The property damage to the city has been assessed at north of $100,000 dollars. The DC police have been accused by protesters of kettling them, forcing individuals, including legal observers and journalists, into enclosed areas and making mass arrests, as well as assaults on protesters in custody.