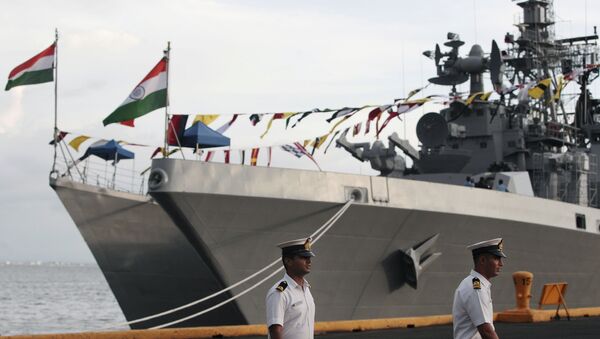 © AP Photo / Aaron Favila
Subscribe
Political analysts say that with growing anxiety in the Indo-Pacific with Chinese assertiveness, further complicated by the uncertainty over US's role in the region, it is not surprising that the quadrilateral dialogue has been revived.

New Delhi (Sputnik) – Amid rising assertiveness of China in the South China Sea, India has come together with US, Australia, and Japan to cooperate and coordinate in the Indo-Pacific region. Indian experts say the development was a result of present geopolitical climate in the region.

​On Sunday,  meeting between the officials of the four countries which form the Quadrilateral dialogue partners agreed that a "free, open, prosperous and inclusive Indo-Pacific region serves the long-term interests of all countries in the region and of the world at large." The meeting was held a day before the ASEAN Summit.

In addition, the meeting also discussed the "common challenges of terrorism and proliferation linkages impacting the region," according to the Ministry of External Affairs. The significance of the statement lies in the fact that India has highlighted the links between North Korea and Pakistan in the development of their nuclear programmes.

Indian Prime Minister Narendra Modi is in Manila to attend the Summit and is slated to meet all the counterparts of the Quadrilateral dialogue partners separately one by on the sidelines of the summit.

The last meeting of the quadrilateral dialogue took place in 2007 but didn't lead to anywhere due to Australian reluctance to join any alliance which was apparently aimed at Beijing.

Time’s Up: Air India Pilot Refuses to Fly, Leaving Passengers in the Lurch
India was represented in the meeting by two MEA officials — joint secretary (East Asia) Pranay Verma, who handles India’s relations with China, Japan, North Korea and South Korea, and joint secretary (South) Vinay Kumar, who handles Australia and Philippines among other countries in the region.

The Indian statement noted that the discussions focused on cooperation based on "converging vision and values for the promotion of peace, stability, and prosperity in an increasingly inter-connected region that they share with each other and with other partners."

Experts in India aren't surprised with the revival of the quadrilateral dialogue.

"Let's be clear that there is a growing anxiety in the Indo-Pacific with Chinese assertiveness, further complicated by the uncertainty over US's role in the region. Therefore, it is not surprising that the quadrilateral dialogue has been revived," Harsh Pant, distinguished fellow at the Observer Research Foundation told Sputnik.