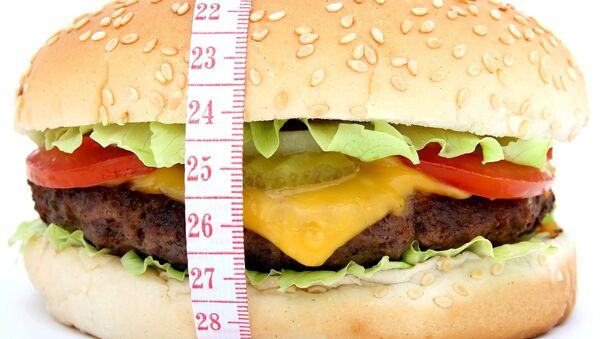 CC0 / /
Subscribe
Britain is now the most obese nation in Western Europe, as new figures reveal more than half the adult population are officially overweight.

Britons are drinking and eating themselves to death as a worrying new report released on Monday, November 13, reveals it is now the most obese nation in Western Europe, according to the Organization for Economic Co-operation and Development (OECD).

Rising obesity, alcohol consumption, length of hospital stays: get the #stats in #Health at a Glance, out today https://t.co/VVkLUqi2w2 pic.twitter.com/7BnLJkBQeA

Obesity rates have doubled over the past two decades, with 63 percent of the British adult population found to be overweight due to a diet of fast foods and drink.

Latest statistics show that the UK is now the sixth heaviest — "considerably worse" than the rest of the 35-member club of wealthy nations.

British obesity rates have grown with nearly one in three people — some 27 percent — found to have a body mass index (BMI) above 30 while the OECD average is 19 percent. Overweight people have a BMI between 25 and 30 on average.

The new figures show that the UK is one of five countries suffering from "historically high" rates of obesity since the 1990s, having risen by 92 percent, compared to 65 percent in the United States.

Dr. Chris James, economist and health policy analyst at OECD, said there were a number of factors responsible for Britain's poor showing in this latest report.

He warned that many Britons had an unhealthy lifestyle, often lacking physical activity and based on poor diets, which had contributed to the rise in obesity levels.

The expert admitted that Britain only had itself to blame, with Brits too reliant on cars instead of walking. Spending long hours in front of television sets and computers were also contributing factors, he explained.

"I think the good news is there's a lot can be done to tackle this — there is a range of different interventions. I think a lot should be done at schools, such as encouraging healthy lunches," Dr. James told Sputnik.

The OECD praised campaigns to fight obesity, such as the decision by hospitals in England to ban "super-size" confectionery chocolate bars from hospital shops as well as the impending UK government sugar tax. It insisted, however, that more still needs to be done to combat the growing problem.

"There is a lot of work around businesses reformulating products and making them slowly reduce added sugar and processed foods, looking at portion sizes. A lot more needs to be done on communication and information, making people understand the risks of unhealthy diets and looking at ways of regulating television and radio advertising," Dr. James told Sputnik.

A number of OECD nations, such as Australia and Canada, have managed to reduce and stabilize obesity levels in recent years, with Japan remaining the lowest at 4%.

#Obesity rate increasing in Britain by about 27% and it is the sixth heaviest developed country according to Economic Co-operation and Development (OECD). The countries with the lowest levels of obesity are Japan, Korea, Italy and Switzerland. pic.twitter.com/n0HYrSfCwu

Britain is, however, doing better at tackling child obesity.

Figures show it is stable at 24%, remaining below average over the past decade, at a time when it is increasing rapidly across the rest of Europe.

On a positive note, good access to treatment remains stable for patients, although the number of doctors and nurses available across the NHS in England is down per head by 18 and 12 percent respectively.

Drinking on the Rise

'Drunkorexia' Epidemic Among Young Brits Who Aren't Eating to Get More Drunk
A key concern, according to the study, is also Britain's high adolescent drunkenness rate, with increasing numbers finding solace in a bottle.

Yet, surprisingly, however, the overall health and life expectancy of Britons remained average, the OECD Health at a Glance report found, aided by some people cutting back on their unhealthy lifestyle by quitting smoking and excessive drinking.

While smoking rates have come down, harmful alcohol consumption among young people and adults remains a serious problem.

The report found that almost a third of 15-year-olds admitted to having been drunk at least twice in their short lives, which is considerably higher than the average 22 percent.

The report praises also improvement in some cancer outcomes, with the survival rate for breast and rectal cancer surpassing the average for the first time.

Colon cancer survival rates, however, are still below average and delays over patient discharges are also worsening, it found.