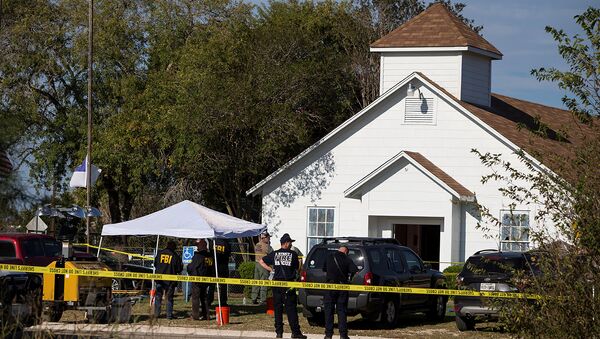 The US Air Force is likely to face millions of dollars in liabilities for the mass shooting that took place earlier this month in Texas, especially since the El Paso Police Department recently revealed that service failed to notify the FBI of the shooter’s criminal history.

Devin Kelley was convicted of domestic violence while serving in the US Air Force in 2012 and that he was caught sneaking firearms onto an air base.

"I think it's almost inevitable that the Air Force will be sued," Lt. Gen. Richard Harding told Stars and Stripes for a Monday report. "And I think there's a case that can be made, you bet."

"What is being shot while you're in church, watching your baby be killed — what's it worth? I don't see how it's not the biggest financial payout in the history of the force," Christensen said.

Devin Patrick Kelley, who killed 25 people in his attack on the First Baptist Church in Sutherland Springs, Texas, was ousted from the Air Force in 2012 for breaking his baby stepson's skull and beating his ex-wife. He was convicted of two charges of domestic assault under Article 128 of the Uniform Code of Military Justice. He was later released with a bad conduct discharge, which, under federal law, should have prevented him from buying or possessing firearms.

However, the Air Force failed to enter Kelley's domestic violence offense into the National Criminal Information Center (NCIC) database, which allowed Kelley to pass a background check and legally purchase the firearm he used to kill 25 parishioners, among them several children, in Texas' worst mass shooting.

"We believe there's a good legal claim against the Air Force for their failure to report," according to Jamal Alsaffar, a partner in a Texas-based law firm that has helped people win millions of dollars in medical malpractice suits related to the military. "Had they done so, Kelley would not have been able to purchase the weapon he used."

Suspect in Maryland Mass Shooting in Custody in Delaware - Police

"This was an obvious duty to report foreseeable danger. They had unique access to report, they didn't, and I would like to know why," Alsaffar added.

The Federal Torts Claims Act prevents lawsuits against the government for harm caused by discretionary or policy decisions. For instance, one could not sue the commanding general that permitted a jury instead of a judge to sentence Kelley in 2012, which resulted in him getting only getting a one year prison sentence and a bad conduct discharge, as that was a discretionary decision. However, not reporting Kelley's criminal offenses to the FBI is not discretionary — "it was required by law," Christensen explained.

Christensen also suspects that in the likely event of a lawsuit, the Air Force will most probably settle early. "First, it's the right thing to do," he said. "Second, the last thing they'd want is for this to be in court. They'd be open to discovery and a lot of things would come to light about their cavalier attitude. And there's the potential for a huge payout, depending on Texas law," he said.