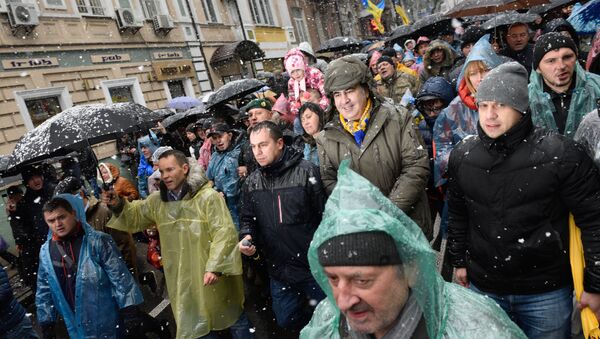 © Sputnik / Stringer
/
Go to the photo bank
Subscribe
As the implementation of anti-corruption reforms in Ukraine has stumbled, hundreds of people gathered in central Kiev on Sunday to call for the impeachment of the incumbent president, a Sputnik correspondent reports from the scene.

KIEV (Sputnik) — Some 400 protesters marched downtown through Maidan Nezalezhnosti, the central square of Kiev, according to local police. The demonstrators called for the adoption of laws on the anti-corruption court and the impeachment of the president, as a Sputnik correspondent reported from the scene. Former regional governor in Ukranian Odessa and ex-president of Georgia Mikheil Saakashvili was also among the protesters.

According to the police, some 1,000 people were expected to participate in the march, with around 300 law enforcement officers allocated to ensure the safety of the event.

Look at us, how massive our horde is, despite the nasty weather. Dishonest oligarchic media, do you say there are 4 hundreds of us? Can you wear glasses?

During the march, Saakashvili reiterated his proposal to launch the process of Poroshenko's and his administration impeachment on December 3, in case Verkhovna Rada did not adopt laws on impeachment and the establishment of the anti-corruption courts.

In the end of October, a draft law on regulating the presidential impeachment was submitted to Verkhovna Rada by Saakashvili’s ally Yury Derevyanko. Saakashvili has also presented his "Plan to Rescue Ukraine in 70 days," that stipulates the impeachment of Ukrainian President Petro Poroshenko, the adoption of a package of laws, including a law on oligarchs, law on the parliamentary election and several reforms in the fields of taxation, customs and health services.

Saakashvi was appointed governor of Ukraine's Odessa region on the initiative of Poroshenko in May 2015. He resigned in one year, blaming the Ukrainian authorities for the omnipresent corruption. Poroshenko revoked Saakashvili's citizenship when it was discovered that he had violated Ukrainian law by providing incorrect information on his citizenship application.