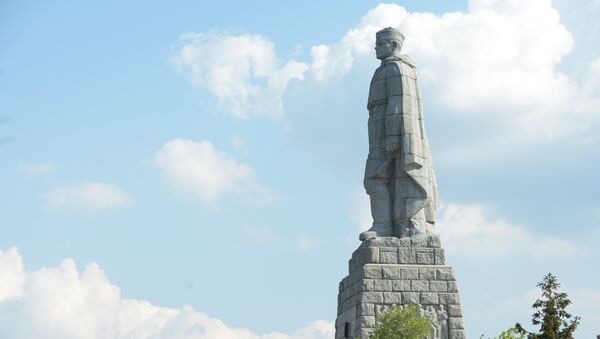 The monument to the fallen Soviet soldiers in Bulgaria's Plovdiv was reportedly spray-painted on Friday with numerous anti-Semitic, anti-Russian and anti-communist graffiti.

MOSCOW (Sputnik) — The Russian embassy in Bulgaria has sent a note demanding Sofia to thoroughly investigate the desecration of a monument in Plovdiv commemorating Soviet soldiers who died in the World War II, Russian Foreign Ministry spokeswoman Maria Zakharova said on Saturday.

"No assaults can affect our solid position of rewriting the results of World War II and justifying the neo-Nazi manifestations. Back in the 1940s, our soldiers fight to save our lives, the life of the future generations. Today, we are paying our debts to them," she said stressing she had received the messages from the Bulgarian nationals with their regret about the vandals’ actions.

#OTD in 1957 the famous #Alyosha Monument in #Plovdiv #Bulgaria was installed to commemorate heroism of Soviet liberators in #WWII pic.twitter.com/NfzOJMmM7N

The statement comes as Bulgaria’s Foreign Ministry has condemned the monument's desecration, calling such acts of vandalism unacceptable.