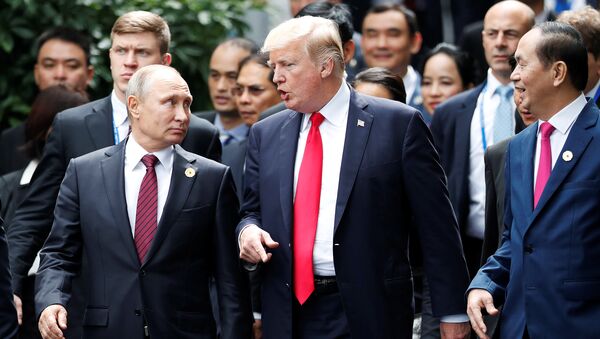 Vladimir Putin and Donald Trump during their brief meeting on the sidelines of the APEC summit approved a joint statement on Syria.

The presidents of Russia and the US reaffirmed their commitment to the sovereignty and territorial integrity of Syria and called on the parties to the conflict there to participate in the Geneva political process, and reiterated the need to destroy Daesh, according to a joint statement they issued following a meeting in Da Nang, where the APEC summit is taking place.

According to the joint statement on Syria, "the presidents agreed to maintain the existing military communication channels to ensure the security of US and Russian armed forces, as well as to prevent dangerous incidents involving the forces of allies fighting the Daesh terror group."

Vladimir Putin and Donald Trump also praised the "successful US-Russia enhanced de-confliction efforts" between the countries military that have "dramatically accelerated" the terrorists’ losses on the battlefield.

"They reviewed progress on the ceasefire in southwest Syria that was finalized the last time the two presidents met in Hamburg, Germany on July 7, 2017," the joint statement read.

Also Russian President Vladimir Putin and US President Donald Trump urged the member states of the United Nations to increase their contributions to providing humanitarian aid to Syria in the coming months.

The document was prepared by the experts of the two countries and agreed on by Russian Foreign Minister Sergei Lavrov and US State Secretary Rex Tillerson on Saturday.

Kremlin spokesman Dmitry Peskov has told Sputnik that the statement was specifically prepared for the meeting in Da Nang.