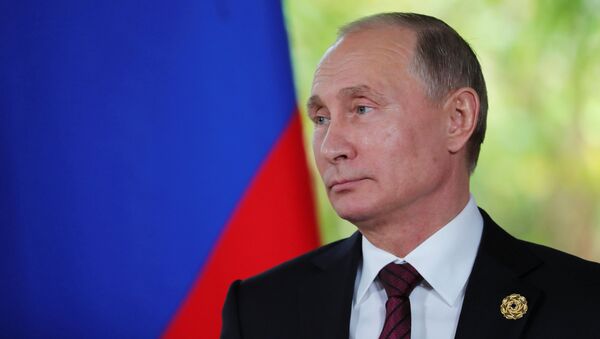 Wrapping up his visit to the 2017 Asia Pacific Economic Cooperation Summit in Vietnam, Russian President Vladimir Putin commented that "An attack on our media in the United States is an attack on freedom of speech, without a doubt. We're disappointed."

"We will have to formulate some kind of response and it will mirror," any constraints implemented by lawmakers in Washington on Moscow-based media outlets operating on US soil, the Russian president added.

"I want to draw your attention to the fact that there is no — and there can't be — confirmation that Russian media meddled in election campaigns," Putin said to reporters at the conclusion of the November 10-11 APEC forum in Da Nang, Vietnam.

Plans currently being drawn up in the Federal Assembly — Russia's parliament — include new legislation that could be introduced as early as next week classifying US media outlets with offices in Russia as ‘foreign agents.'

The Russian president tempered his remarks by suggesting a more even-handed response, however.

"What is being discussed in the State Duma [Russia's lower house of parliament], I saw it yesterday, it might be a little too harsh," Putin suggested, "but it's natural, because at the level of the legislative arm you often hear extreme views, harsh judgment and tough proposals."

If US media outlets operating on Russian soil are legislatively required to be labeled as ‘foreign agents' in the country, then foreign media would be mandated to regularly provide detailed reports to the Kremlin concerning employees and where the money comes from to keep those offices afloat.

Both Russia Today (RT) and Sputnik News — Moscow-based media outlets staffing reporters, editors and journalists on US soil — have been requested by the US Congress, under an obscure 1938 clause designed to limit the influence of Nazism, to register in the United States as ‘foreign agents.'

The US security community has claimed that RT and Sputnik attempted to sway the outcome of the 2016 US presidential election, assertions that the two broadcasting outlets, as well as the Kremlin, have consistently denied.