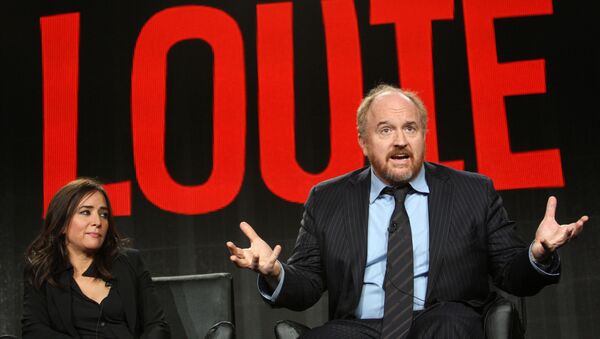 © REUTERS / David McNew/File Photo
Subscribe
Adding a new twist to sexual harassment scandals surrounding top show biz figures and politicians on both sides of the Atlantic, five women have complained about the uncomfortable experiences they claim they have had with popular comedian and filmmaker Louis CK.

In an interview with The New York Times, members of a Chicago comedy duo Dana Min Goodman and Julia Wolov said that Louis CK (real name Louis Szekely) masturbated in front of them in his hotel room.

The other women complained about other acts of sexual misconduct by the 50-year-old funnyman.

Just hours after the NYT report came out, HBO announced that  Louis CK would “no longer be participating” in the benefit concert, “Night of Too Many Stars: America Unites for Autism Programs,” and that it was removing his previous projects from its On Demand services.

Adding to the comedian’s woes, the small distribution company handling the release of his new film “I Love You, Daddy,” cancelled the premiere, which was scheduled for Thursday night in New York.

The scandal is just the latest in a string of similar accusations earlier brought against movie mogul Harvey Weinstein and Oscar-winning actor Kevin Spacey.

“He told me how important it was to have chemistry off-screen as he sat me down and unzipped his leather pants,” de Rossi tweeted on Thursday.