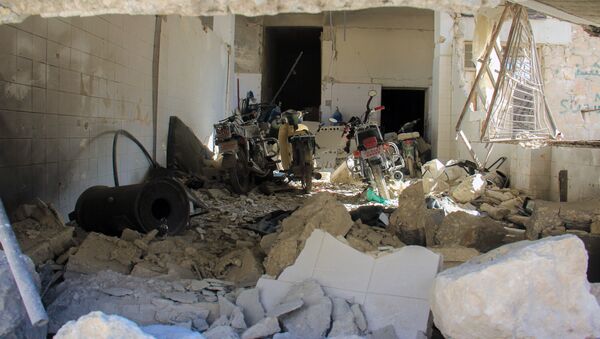 Only reporters of 2 US media outlets and few European have attended the press event.

GENEVA (Sputnik) — The Association of Correspondents Accredited to the United Nations (ACANU) has informed UN High Commissioner for Human Rights Zeid Ra’ad Al Hussein in a letter obtained by Sputnik that a secret September UN press conference on chemical attacks in Syria was closed to a great number of UN press corps members in what looks like a "case of serious discrimination."

"I would like to bring to your attention a case of serious discrimination against the vast majority of accredited correspondents at the UN Office at Geneva (UNOG)… The choice of media, two from the US, one from the UK, one from UK/Canada, one from France and one from Spain – shut out all the other UN correspondents. Especially striking was that no correspondent from an Arab country had access to this briefing on Syria," ACANU President Jan Dirk Herbermann wrote.

Methods Investigating Idlib Chemical Attack Should Be Revised – Syrian Diplomat
According to the letter, the briefing was held by at least one of the authors of the UN report on human rights violations in Syria a day before the report was released to the public.

According to Herbermann, the correspondents who were at the meeting received an advantage over those absent, since they had more time to prepare their articles on a complicated issue.

"The secret briefing is totally unacceptable and very poor judgement. This selective approach goes against core UN values of human rights, equity and respect for all," the ACANU president said.

Sputnik has learned the briefing could be attended by journalists from Reuters, AFP, AP, EFE, BBC and the New York Times newspaper. A Reuters correspondent told Sputnik that the agency "might" have been present at the briefing. A journalist from EFE said she was not there personally, but her agency was at the meeting. A correspondent from AP confirmed presence at the briefing but could not say who else was there.

ACANU includes about 150 correspondents from the largest media outlets in the world.

Syria Ambassador to UN Refutes Accusations of Chemical Weapons Use by Army
Moscow has slammed the document, stating that the report looked more like an amateur document, and was based mostly on assumptions and the selective use of facts.