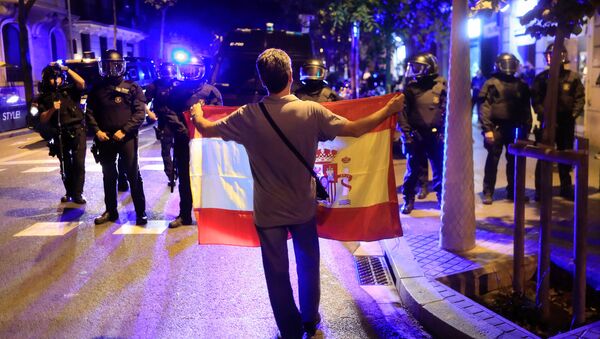 The Spanish newspaper El Pais has recently published a set of articles about Russian media's biased coverage of the situation in Barcelona and the alleged support of the Catalan independence bid by the so-called "Russian hackers".

The Russian Embassy in Spain on Friday criticized these fake news being spread by El Pais about the alleged Russian interference in the developments in Catalonia.

"It is still surprising that several Spanish media spread rumors about an alleged 'Russian hand' in Catalonia. They do not help the reader to see the true origin and the potential ways to address the problems of this autonomous community," the embassy said in a statement.

According to the statement, reporters both in Spain and Russia can express their opinion, but in Russia specifically the culture of journalism prevents reporters from "spreading fake news."

The Russian diplomats were also surprised that the US authorities' demand to have the RT broadcaster be registered as foreign agent was welcomed in Spain.

"But where are the concerns as for the media freedom? Well done, the comrades from El Pais!" the statement added.

Spanish Court Sets Bail for Catalan Speaker Detained Over Independence Bid
Catalonia held a referendum on independence on October 1, with over 90 percent backing the sovereignty for the autonomous region. Madrid has refused to recognize the legality of the vote or its results. The Catalan parliament passed their declaration of independence on October 27, to which the Spanish Senate responded by approving the introduction of direct rule over the region. Madrid then dissolved the regional government and parliament, and scheduled snap elections for December 21.

Earlier, Several Spanish media outlets, including El Pais, and senior officials such as Defense Minister Maria Dolores de Cospedal, have said that several statements in support of Catalonia's secession from Spain had been voiced by Russia. At the same time, the minister has added that this did not prove that the Russian government was behind such activities.

Meantime, Russian senior officials, including President Vladimir Putin, have repeatedly stated that they consider the crisis in Catalonia an internal affair of Spain.