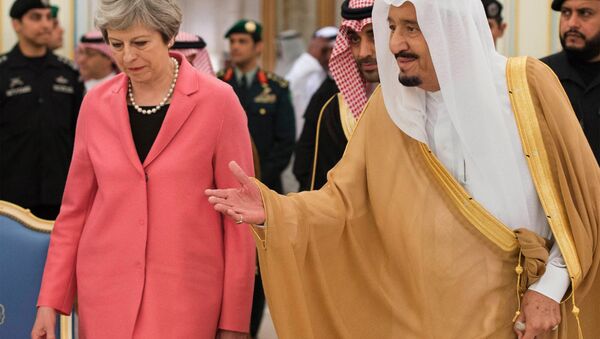 © AP Photo / Saudi Press Agency
Subscribe
Saudi Aramco has been preparing for a Western stock market listing for some time, and the US and UK have both gone to great lengths to court the company - now, Theresa May's government has signed off on a US$2 billion dollar loan guarantee for the firm.

The British government is poised to sign off a US$2 billion loan guarantee for Saudi Aramco, as London scrambles to host the stock market flotation of Saudi Arabia's state energy giant — an initial public offering analyst believe could be the biggest ever.

The new loan will be one of UKEF's biggest ever — the largest, a US$2.1 billion guarantee to Oman to support the purchase of BAE Systems military hardware, was granted in 2016.

"We will be providing Saudi Aramco with support in the form of credit guarantees to procure from the UK. This builds on previous support for UK exports as part of Saudi Aramco joint venture projects," a Treasury spokesperson said in a statement.

​The UK Treasury, according to CityAM, is said to have carried out substantial due diligence, and is now in the process of "finalizing" a credit backstop for the world's largest oil producer via the UK Export Finance (UKEF) group, which provides overseas purchasers of UK goods and services with credit lines and guarantees in order they buy British.

Previously, UKEF provided Aramco with over US$500 millionin support of UK exports for the Sadara chemicals project, a joint venture with Dow Chemical established in 2011 through two tranches of funding in 2013-14 and 2015-16. ​Some have criticized the new loan, suggesting it is just the latest attempt by the UK government to woo Aramco to British shores, but the Treasury has denied the deal is connected with the impending IPO.

HMG guaranteeing a loan to ARAMCO would be a further lurch in descent to mercantilism. Mr Gladstone will be turning in his grave. #stateaid

​This battle itself went public November 4, with President Donald Trump saying he would "very much appreciate" the company gracing the NYSE.

Would very much appreciate Saudi Arabia doing their IPO of Aramco with the New York Stock Exchange. Important to the United States!

The New York and London Stock Exchanges have been engaged in a "covert war" for much of 2017 to seize the Saudi listing, which may value the company at US$2 trillion.

In April, LSX chief executive Xavier Rolet escorted Prime Minister Theresa May on a visit to Riyadh, meeting with chiefs of the Saudi sovereign wealth fund, a major influence on the Kingdom's economic decision-making.

In May, it was announced the stock exchange intended to create a structure allowing the "famously secretive" company to reap all the benefits of a primary listing without being subject to the corporate governance and reporting obligations typically required. 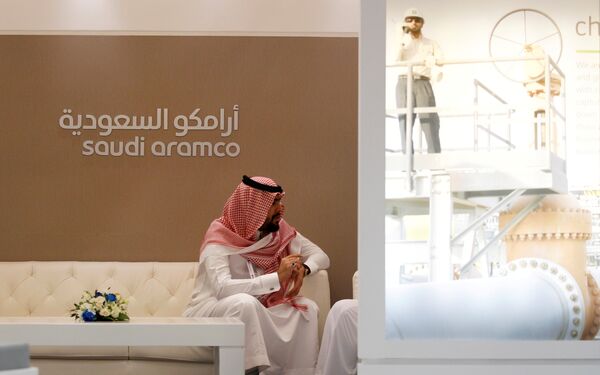 A Saudi Aramco employee sits in the area of its stand at the Middle East Petrotech 2016, an exhibition and conference for the refining and petrochemical industries, in Manama, Bahrain, September 27, 2016.
© REUTERS / Hamad I Mohammed

Saudi officials have begun exploring alternatives to an overseas listing, given even under massively relaxed reporting requirements the company would be compelled to disclose some of Aramco's internal workings to the outside world, potentially including Riyadh's oil reserves.

For some time, analysts believed such transparency requirements would be a stumbling block to the company ever "going public" — and given one option apparently under consideration is a private placement and domestic listing instead, such speculation may have foundation.

Moreover, the latest events in the Kingdom, as well as rising tensions with Iran, have raised fears of political risk associated with Saudi, which could undermine any push for an international listing.

Saudi is not the only Gulf state being seduced by the UK — ministers have has identified the cluster of country as a priority trading partner post-Brexit, given annual exports to the six-member Gulf Cooperation Council are worth US$40 billion — more than exports to China, and roughly twice the value of exports to India.