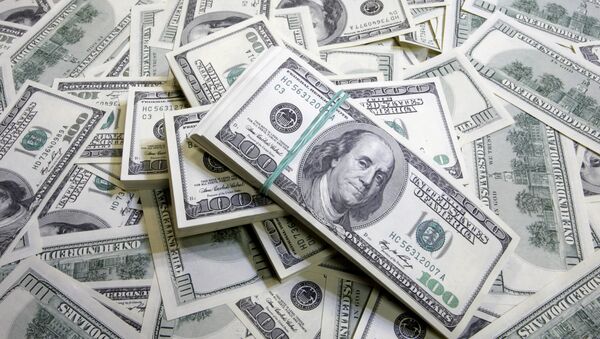 © Sputnik / Mihail Kutusov
/
Go to the photo bank
Subscribe
In an ever-widening gap, the troika of America’s richest people has as much money as do 160 million of their compatriots in the bottom half of the US population, which the Institute for Policy Studies (IPS) warns has created a “moral crisis.’

A report prepared by the Washington-based think tank and aptly titled “Billionaire Bonanza,” estimates the combined wealth of Bill Gates, Jeff Bezos and Warren Buffet at a whopping $248.5 billion.

It warns that President Trump’s proposed tax reform would “exacerbate existing wealth disparities” as 80 percent of tax benefits would end up in the pockets of the country’s wealthiest 1 percent.

READ MORE: Eight Billionaires Own as Much Wealth as Poorest Half of World — Oxfam

According to the IPS report, the billionaires on the list of America’s 400 richest people are worth a combined $2.68 trillion, which is more than the gross domestic product of Britain.

“Wealth inequality is on the rise. Now is the time for actions that reduce this inequality, not tax cuts for the very wealthy,” Chuck Collins, an economist and co-author of the report, told The Guardian.

“Our wealthiest 400 now have more wealth combined than the bottom 64% of the US population, an estimated 80 million  households or 204 million people,” the report states. “That’s more people than the population of Canada and Mexico combined.”

Gold in the Alps: Billionaires Store Wealth in Ex-Swiss Army Bunkers
Josh Hoxie, who also contributed to the IPS report, said that “so much money concentrating in so few hands while so many people struggle is not just bad economics, it’s a moral crisis.”

The report says that many Americans are now joining an “emerging anti-inequality movement,” like the one that changed America’s vastly unequal system of income and wealth distribution a century ago.

While America’s elite, bling-wearing class is getting richer, one in five US households have either zero or negative wealth.

Inequality is even more pronounced among minorities with three in 10 black families and 27 Latino ones having zero or negative wealth, compared with 14 percent of white households, the report stated.

000000
Popular comments
So what it has not even started to get serious with the 0.1% until they have enslaved the entire worlds population into slavery for the select few. I have changed my mind about uncle Adolf. Do you guess which way?