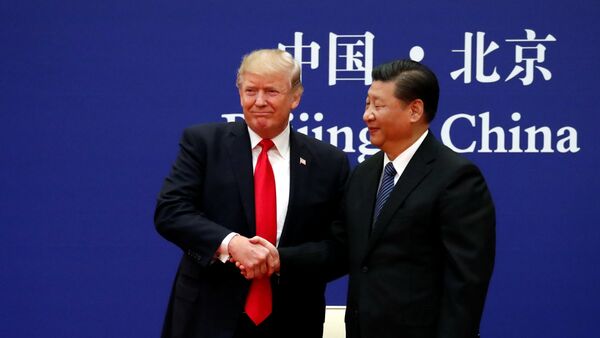 © REUTERS / Jonathan Ernst
Subscribe
US President Donald Trump has met with his Chinese counterpart Xi Jinping during his Asian tour. The visit was quite fruitful for business ties, reportedly resulting in trade agreements worth $253.4 billion.

WASHINGTON (Sputnik) — During his meeting with the Chinese president, US President Donald Trump criticized previous administrations for letting the US trade policy towards China become unbalanced.

"The United States really has to change its policies because they’ve gotten so far behind on trade with China and frankly with other countries," Trump said at an expanded meeting with President Xi. "And I have great respect for you for that because you are representing China. But it’s too bad that past administrations allowed it to get so far out of kilter."

Trump's two-day visit to Beijing resulted in a number of trade agreements worth $253.4 billion, according to Xi Jinping's statements during a joint press conference on Thursday. Moreover, on the eve of Trump's visit, the US and Chinese companies have already signed a number of deals worth $9 billion.

US President Donald Trump has predictably touched upon the escalation of tensions on the Korean peninsula. The president believes "things will happen" in the ongoing North Korea crisis, as the US leader claimed.

"Our meeting this morning in front of your representatives and my representatives was excellent in discussing North Korea and I do believe there's a solution to that as you do," Trump said in a recorded video comment shared by the US Department of State.

Trump spoke highly of prospects for US-Chinese cooperation in solving this.

"I think we are going to do tremendous things for both China and for the United States… I’m looking forward to many years of friendship and working together to solve not only our problems but world problems and problems of great danger and security," he said.

According to Trump, China can easily and quickly solve the problem on the Korean peninsula if the Chinese president works hard on the issue.

In turn, President Xi stressed that US-Chinese partnership "is not only in the interest of our two nations but also the world, global stability and development."

"For China and the United States, cooperation is the only right choice," he added.