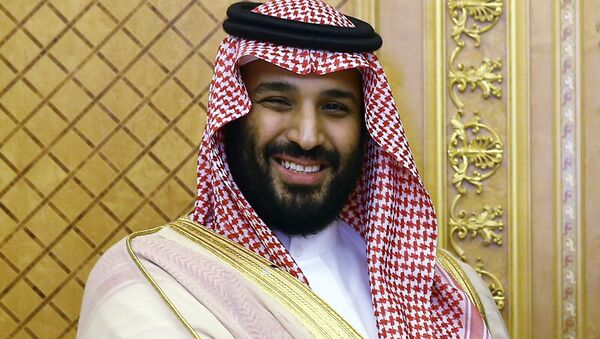 John Wight
All materials
Though the purge and arrest of dozens of leading Saudi officials, ministers and princes by 32-year old crown Prince Mohammed bin Salman may have taken many by surprise, considering Saudi Arabia exists at the epicenter of a range of crises within the world's most tempestuous region, it is a demarche which assumes the character of just another day.

Nothing normally ever happens in the Kingdom of Saudi Arabia (KSA) without a reason, which is why the death of Prince Mansour bin Muqrin, along with seven government officials, in a helicopter crash near the Yemen-Saudi border at the same time as the aforesaid purge was taking place is hard to confidently attribute to coincidence.

The official reason given for carrying out this recent frenzy of arrests, demotions and sackings has been given as anti-corruption. However only the most naive could possibly believe, given the circumstances and timing, that this is the sole or even primary motive for such a drastic and far-reaching purge of the country's upper echelons.

At just 32 the crown prince is on course to be the youngest Saudi king in the nation's relatively short history. Surrounded by rivals and potential rivals for his father's throne — chief among them son of the late King Abdullah, Prince Mutaib bin Abdullah — and what with the various crises that have beset the oil-rich Sunni theocracy of late, there seems no doubt that a changing of the guard driven by not only internal motives but also geopolitical reasons with Iran in mind.

The sudden resignation of Lebanese Prime Minister Saad Hariri, a close ally of the faction of the Saudi power structure that has just been upended by Prince Salman's purge, merely adds to the intrigue involved in this affair. Someone in no doubt as to the connection between Hariri's resignation, which the Lebanese Prime Minister blamed on an Iranian/Hezbollah plot to assassinate him, is Hassan Nasrallah, leader of the aforementioned Lebanese resistance movement. In a recent televised address to his supporters, Nasrallah claimed, "It was not his [Hariri's] intention, not his wish and not his decision to quit," asserting that the decision was "imposed" on him by his Saudi backers.

That, as mentioned, Saudi Arabia is a state currently engulfed by multiple crises is putting it mildly. The war in Yemen has entered its third year with no end in sight. Indeed the recent interception of a ballistic missile, launched from Yemen and headed for the airport in the Saudi capital Riyadh, is evidence of the quagmire the war has become for the kingdom. The human toll of the conflict on the Yemeni people — and deafening silence on the part of Western governments, especially the kingdom's closest Western allies, the US and UK, over the war crimes committed against civilians by Saudi forces — has been so egregious as to leave no doubt, if indeed there could be any, of the desperation on the part of what increasingly resembles a rogue state to neuter the power and influence of Iran in the region.

The Shia behemoth, Iran, is as everyone knows Riyadh's most bitter regional rival and mortal enemy. It is an objective that drives the kingdom's foreign policy and alliances, both within and without the region, and which like a rabid dog coveting a bone is an obsession that has succeeded in banishing rationality from its actions in recent years.

The failure of the kingdom's designs for regime change in Damascus, the failure of its war aims in Yemen, the sharp fall in the price of oil and its concomitant impact on the Saudi economy, an historically high level of youth unemployment at home and clamor of condemnation internationally over the country's deplorable human rights record — taken together with its failure to weaken Tehran, despite doing its utmost to leverage US aggression against the Iranians, and we are witnessing a country in political meltdown.

Ex-US Military Official: Fear of Rising Iran Likely Influenced Saudi’s Purge
What should be borne in mind is that Saudi Arabia and Iran are already in a de facto state of war, and have been for a number of years. Each heads a countervailing and antagonistic regional axis of religious, political and geopolitical rivalry, pitted in a determined struggle that evinces no sign of abating. The Saudis, backed by Washington and the West, represent a rigid sectarian Sunni vision for the region, while the Iranians — along with their close allies Hezbollah, the Assad government in Syria, and in conjunction with Russia — are a pillar of non-sectarianism and resistance to US hegemony.

The Israelis, meanwhile, share in Iran a common enemy with Riyadh. Thus the under-the-radar visit to Israel by crown Prince Mohammed bin Salman in September, despite both countries sharing no formal diplomatic ties, allows us to speculate that military and intelligence cooperation when it comes to dealing with Iran is now considered of such strategic importance by both countries that it supersedes any other consideration or difference between them.

In his classic Renaissance text, The Prince, Niccolo Machiavelli provides a blueprint for any prospective leader determined not only to assume power but even more importantly maintaining power.

"The new ruler must determine all the injuries that he will need to inflict. He must inflict them once and for all," Machiavelli writes.

Time will tell whether Saudi Arabia's crown Prince Salman is, as some suggest, bent on opening the door to modernity and reform in a society that has long laboured under the stifling weight of religious sectarianism, oppression and with it corruption and hypocrisy on the part of its sclerotic elite. Whatever unfolds in the weeks and months ahead, Saudi Arabia is a state that currently exists in the cross hairs of multiple and enveloping crises of its own design.