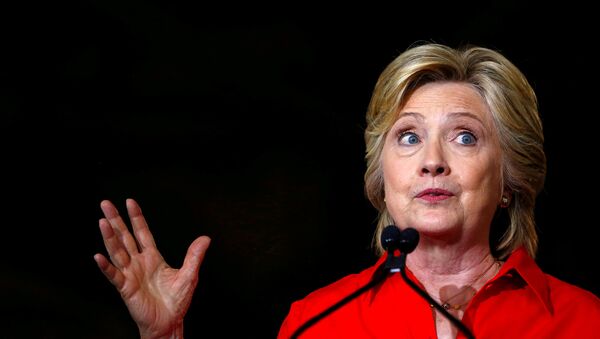 It has been announced that Hillary Clinton is to guest edit Teen Vogue, almost exactly a year to the day she was defeated in the US Presidential election by Donald Trump. The move has attracted ridicule and anger among many.

Almost a year to the day of her defeat in the US presidential election, Hillary Clinton has guest-edited one of the last print editions of Teen Vogue, which is set to hit newsstands December 5.

Today, we're announcing a very special issue of Teen Vogue, guest-edited by @HillaryClinton — the first-ever female Presidential candidate nominated by a major party, a woman who sits at the center of a historic paradigm shift. pic.twitter.com/uC1f5asL4w

​The issue is "a celebration of resistance and resilience," that will feature personal contributions from the former Secretary of State, including an essay addressed to her teenage self. "Believe in yourself — you're going to do great," the twice-failed candidate tells herself, according to an excerpt released by the magazine.

"Believe in yourself. You’re going to do great." –@HillaryClinton https://t.co/IqSTO6cXqX

The news attracted praise from Clinton's supporters, but many were quick to lampoon the move, suggesting she was attempting to appear trendy, among other things.

Crooked Hillary how much did you pay Teen Vogue to weasel your way into the magazine?

Almost exactly a year after election day and Hillary Clinton has been reduced to… editing Teen Vogue? https://t.co/UVBfsqf3na

As if we haven't heard enough from her already. Hillary, you lost. We don't care what you have to say. #ByeFelicia https://t.co/C2sV7iKrV9

Here I fixed your mistake:
"who sits at the center of a historic multitude of scandals and illegal activity."

What is she telling her? How to get rid of those on your way? 😂😂 yeah! @HillaryClinton you have lots to tell. Hopefully under oath! Soon!!

A loser a role model?

Full of hypocrisy, and the title is a huge cliche.

Happy Birthday Dear Hillary: Assange Trolls Clinton With Her Own 2016 Tweet
​In announcing the move, Clinton, who is continuing to promote her book, What Happened — a narrative of her 2016 campaign, which attributed her loss largely to Russian meddling, and Julian Assange — alluded to the anniversary of her electoral loss.

"I know the last year hasn't been easy for any of us. The letters I received after the election helped me pick myself up and keep going, and I'm looking forward to sharing a few with you," she wrote.

Clinton will be one of the last people to serve as the magazine's guest editor, as Teen Vogue's owner Conde Nast has announced it will end its print edition, cutting nearly 80 jobs in the process.