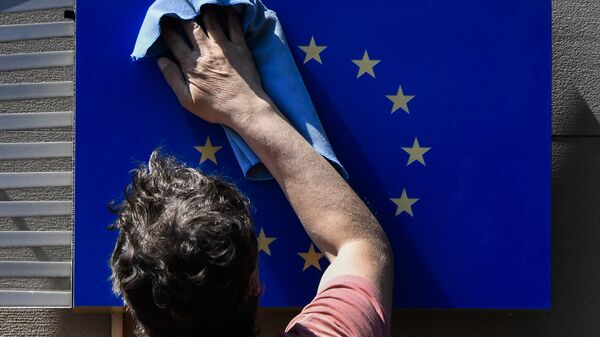 The EU needs to reform if it is to survive the coming decades, Russell Foster from the Department of European & International Studies at King’s College London, told Sputnik after a leaked German Defense Ministry report predicted that the EU could collapse by 2040.

Sputnik: Why is the Defense Ministry considering such scenarios? Is the future of Europe quite so bleak?

Russell Foster: The future of Europe doesn’t look very good at the moment. In this planning document the German military and, by extension, the German government, are really considering serious possibilities that could emerge in Europe. Of the six scenarios [in the report] three are quite neutral and positive. Two of them are looking at the possibility of Europe becoming peaceful, but the other three are very bleak. One of them anticipates that eastern members might join a Russia-based bloc, maybe an expansion of the Eurasian Economic Union. One of them foresees a rise in internal extremism in European countries; one predicts the breakup of Europe and an increasingly chaotic world.

Sputnik: Would it be reasonable to assume that European countries are taking just as long-sighted view as Germany?

Majority of Germans, Italians Believes at Least 1 Country to Leave EU in Future
Russell Foster: Other European militaries are not taking a long-term view that they really should be because there is not going to be any call for further political or military integration in Europe. [French President] Emmanuel Macron is calling for greater integration, but his vision is completely at odds with the views of the European populations who over the past two years have been returning very Euro-skeptic governments. So the idea of a united European military, the dream of Macron and Jean-Claude Juncker, is not going to happen. Future military scenarios are going to be dealt with by individual member-countries or by NATO and with the somewhat erratic and unpredictable policy priorities of President Trump NATO can’t predict the amount of American support it would receive in the event of a future conflict.

Sputnik: What then could be the underlying causes of some countries’ possible withdrawal from the EU?

Russell Foster: There are several factors causing people to lose faith in the EU. One is the ongoing democratic deficit in the EU which has the powers of a government but none of the legitimacy of a government because we don’t vote for EU Commissioners. Another is the economic problems in the Mediterranean and the possibility of a second Eurozone crisis which could be triggered by Catalonia, and most significantly, by the ongoing migration problem. So the Germany Defense Ministry’s report reflects many of these concerns. EU leaders are badly out of touch with 500 million European citizens.

Sputnik: What is your take on the so-called “Eastern bloc” and the possibility that some EU countries could turn their gaze eastwards?

'Both Europe and Russia Interested in the Reset of EU in Near Future'
Russell Foster: If by 2040 the European Union does break apart, we could see quite significant social and economic instability in Europe, while the Russian Federation will look a more stable and economically secure state, so it’s possible that the states which once were part of the Warsaw Pact would look eastwards to a more secure Russia, rather than the unpredictable economies of Western Europe.

Sputnik: Just how viable do think the European Union actually is?

Russell Foster: It’s very tempting for me to say that the European Union is at death’s door but every time the EU faces a crisis and we think is going to break apart, it does manage to pull through. However, at the moment we have a critical mass of political, economic and social problems which are causing the European populations to lose faith in the EU. Without reforms the EU will not survive until the 2030s. If it does, it is going to be radically reformed, will scale back a lot of its powers and return to being something similar to the European Economic Community and will cease any forms of expansion towards other countries because European populations don’t want that.