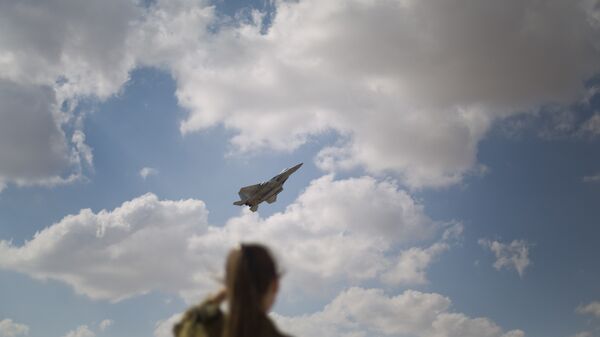 © AP Photo / Ariel Schalit
Subscribe
International
India
Africa
The largest aerial exercise of 2017 took place on Thursday as eight different Air Forces all conducted war games in the skies over Israel. The Blue Flag exercise, also the largest in the history of the Israeli Air Force (IAF), saw a fictional “war” between the countries of Falcon Land and Nowhere Land.

The eleven-day exercises began on Sunday and involved dozens of aircraft flying over a hundred sorties. This was the third Blue Flag exercise. The first in 2013 was attended by Italy, Greece, and the US. Poland joined in for the second in 2015. But the third exercise was the largest yet, adding three new nations to the list: France, Germany, and India, three of the ten largest militaries in the world.

Together, the eight nations made up the country of "Falcon Land", waging war against their hated enemies Nowhere Land — played by a squadron of IAF F-16 fighter jets, missile batteries, and drones.

Col. Itamar, the commander of Ovda air base, claimed that the scenario was designed to be generic practice for a wide variety of aerial combat scenarios, not to simulate a war between, say, the US bloc and Iran. The Nowhere Land Air Force simulated the capabilities of Russian Sukhois and MiGs in addition to operating as F-16s. "They imitated the tactics that will give our ‘blue guys' the best exercise," he said.

While the aerial dogfights and surface-to-air missiles being launched are all simulated, actual bombs are being dropped — on empty patches of desert.

In a statement, IAF officials said the purpose of the exercise was to improve diplomatic relations as well as military cooperation between the eight participating countries as well as expose the participating militaries to new tactics and styles.

The exercise is taking place at Ovda air base near the southernmost tip of Israel, about 40 miles north of the Red Sea and the resort town of Eilat. Located in the middle of the Negev Desert, the air base is surrounded by barren land which makes it perfect for large scale exercises.

This is the first time since World War I that German planes have flown over Israel (or Ottoman Palestine, as it was called in those days). The Luftwaffe has never participated in Israeli military exercises before, but this time a half-dozen German Eurofighters were present for Blue Flag.

Germany and Israel have a friendly-but-complicated relationship, largely due to Nazi Germany's perpetration of the attempted genocide of the Jewish people in the 1930s and 40s. The modern Luftwaffe is symbolized by the Iron Cross — a German symbol for centuries, but often associated with the Nazis who frequently used the symbol for military medals.

"Seeing the Luftwaffe airplanes [adorned with Iron Crosses] entering our hangars — it's something I'll always remember," said Itamar. "It's sensitive. It's emotional. The past can't be changed."

India's contingent included a Lockheed Martin C-130J Super Hercules and a retinue of about 90 special forces soldiers who will participate in exercises to simulate commando drops behind enemy lines.

Their participation has been a marker of the closer alignment between India and Israel. In July, Narendra Modi became the first Indian Prime Minister to visit Israel. The two nations have also bolstered military ties: Israel's defense industry is famous for its high-quality military equipment and Modi has made strengthening the Indian military a centerpiece of his policy.