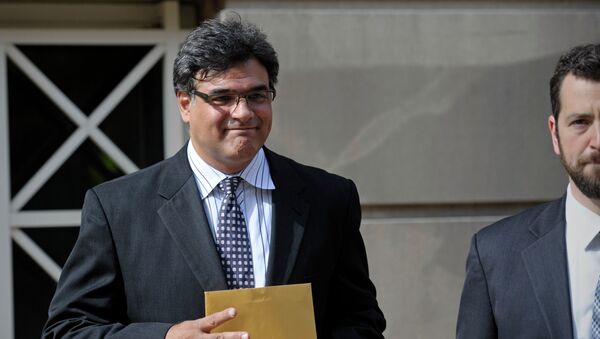 © AP Photo / Cliff Owen
Subscribe
John Kiriakou, renowned Central Intelligence Agency whistleblower and co-host of Sputnik Radio’s Loud & Clear, was invited to address the European Parliament on national security whistleblowing before his appearance was scrapped at the last minute. Loud & Clear spoke with Kiriakou after the snub to find out what happened.

"Disappointingly," co-founder of People for Bernie Sanders Winnie Wong, there to represent the organization, "objected to the fact that I work at Sputnik and said they did not want to appear on a panel with me."

"I can't be on this panel with you," Wong told Kiriakou, by his account. "It's nothing personal. I think you should be proud for what you've done, but you work for Sputnik and so I can't be on the same panel," she said.

​Kiriakou was the only American imprisoned in connection with the CIA torture program authorized by President George W. Bush. His two-and-a-half-year jail sentence wasn't based on the fact that torture is illegal under both US and international law and that Kiriakou had participated in human rights abuses, but rather because he exposed the program publicly. Nobody from the CIA who participated in the torture program has so far been jailed for it, only the person who shed light on its blatant unconstitutionality.

​"Any time I come to Europe, I'm treated so well. Europeans have a much deeper understanding of these issues of national security whistleblowing, torture, drones and nuclear weapons — far, far more than Americans in general, so I'm always treated very well here," Kiriakou said Wednesday.

"I was supposed to appear on a panel this morning and then give a speech in the afternoon," the ex-CIA officer explained. The afternoon speech was able to go forward without any hiccups, "but unfortunately I was removed from the panel," he said, with a disbelieving chuckle, "after one of the other panelists objected to my presence."

"It's a lie that torture of prisoners has saved American lives. The CIA has repeated it over and over again." #Whistleblower @JohnKiriakou pic.twitter.com/puJON2zMt1

​​Wong told Kiriakou she "ran it up the flagpole" with the People for Bernie Sanders organization before saying she wasn't allowed to appear on a panel with him.

"It's so ridiculous on its face that I actually thought she was joking when she first said it, and I laughed when she said it," Kiriakou said.

"It's really something because these same people used to be on Radio Sputnik, they were on our shows, they were on Loud & Clear," co-host Brian Becker said. When "progressives" silence other voices, they set a dangerous precedent regarding how much they think First Amendment is really worth.

"Americans are going to learn the hard way" about the dangers of censorship, Kiriakou said.

"A lot of the questions I fielded today, from a variety of European nationalities, centered on the fact that the United States seems to be easing its way into a new Cold War. But the Cold War has been initiated by the Democrats. This Red Scare is a Democratic invention, not a Republican one. And everyone wanted to talk about it," Kiriakou said.

"It's so ridiculous I thought it was a joke, and because it's not a joke, that makes it actually very dangerous."