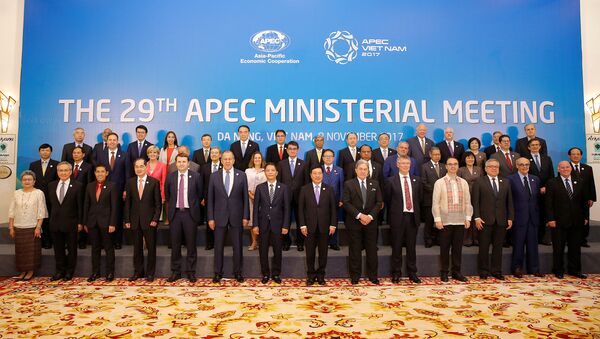 © REUTERS / Made Nagi/Pool
Subscribe
The head of Taiwan's delegation to the APEC summit has told Sputnik about the country's investment plans and relations with Moscow.

DA NANG (Vietnam) (Sputnik) — Chinese Taipei, commonly referred to as Taiwan, will pledge $3.5 billion for a program aimed at improving infrastructure in the economies of the Asia-Pacific Economic Cooperation (APEC), according to delegation head James Soong.

"At this time we are offering about 3 billion, it's actually 3.5 billion US dollars to help improve basic level infrastructure projects. It's designed for APEC in general and for ASEAN countries in particular," Soong told Sputnik on the sidelines of the APEC Summit in Vietnam’s Da Nang.

The project stipulates the establishment of a financial structure for Taiwan-based industry and businesses, which are seeking to invest in the infrastructure of APEC countries, while Taiwanese banks will allocate funds for financing those businesses.

Another member of the delegation, ruling Democratic Progressive Party (DPP) lawmaker Bi-Khim Hsaio stated that the issue would be brought up during the ongoing APEC Economic Leaders' Week. Hsaio specified that it would be presented not as an independent project, but as an initiative of the country to participate and support infrastructure projects in the region.

The APEC Women and The Economy Sub-Fund

According to James Soong, the APEC Women and the Economy Sub-Fund, a joint US-Taiwan initiative, has been finalized, and Australia will officially announce its participation in the initiative during the Economic Leaders' Week in the Vietnamese city of Da Nang.

"Last year, we proposed to establish a women's empowerment sub-fund, and this year we will announce the inauguration of such a sub-fund and Australia is participating in this as well," Soong said.

In 2016, Australia expressed its interest in participating in the sub-fund, making a donation, Hsiao specified.

The creation of the APEC Women and the Economy Sub-Fund was initiated by Taiwan and Washington during last year's Economic Leaders' Week in Peru.

Taiwan is willing to enhance trade relations with Russia as well as to cooperate in the fields of agriculture and tourism, according to James Soong.

"Taiwan has a very strong desire to continue to strengthen our relationship with Russia… There are several areas that we're particularly interested in. We're looking forward to expanding our trade relations with the Eastern part [of Russia], particularly with the Vladivostok area. And we're looking forward to joint projects in Siberia. Certain things can be done in agriculture and high tech," Soong said.

The delegation head added that Taiwan was willing to share its agricultural technologies with all the APEC member economies eager to engage in joint projects, in particular, it could offer its irrigation systems to Peru.

According to the diplomat, bilateral Russian-Taiwanese trade totaled $3 billion in the first nine months of 2017.

Trump Says May Meet Putin at APEC Leaders' Meeting in Vietnam
The island of Taiwan is viewed as a Chinese breakaway province by Beijing. Russia, along with many other countries, does not recognize Taiwan as a sovereign nation and adheres to the "One China" policy.

On Cooperation With Peru

James Soong plans to hold a meeting with Peruvian President Pedro Pablo Kuczynski on the sidelines of the summit and discuss cooperation in agriculture among the priority issues.

"Last year, the APEC meeting was in Peru, I had a good opportunity to discuss all the issues with Peru's President Kuczynski and this time I'm going to see him again, we have already set up the sideline meeting [at APEC]. I'm sure that we will discuss a lot of issues," Soong said.

The delegation head added that Taiwan was willing to share its agriculture technologies with all APEC member economies eager to engage in joint projects, in particular, on irrigation systems with Peru.

"Taiwanese agricultural technologies, particularly in food preservation are very advanced and we want to share it with them [APEC member economies]. And it's not only about rice. We would be happy to negotiate with Indonesia, for example. Indonesia has such big land, so we would like to invest, to work together in sugar industry," Soong explained.

APEC aims to strengthen regional economic integration, and according to 2015 data, its member nations account for approximately 59 percent of the world's GDP and 49 percent of world trade. Established in 1989, APEC includes 21 members.

From November 6-11, the Vietnamese coastal city of Da Nang is hosting the APEC Economic Leaders’ Week, bringing together high-level delegations from the APEC member states. The Economic Leaders’ Week is considered to be one of the main events of Vietnam's APEC 2017 presidency that sums up its efforts throughout the whole year.