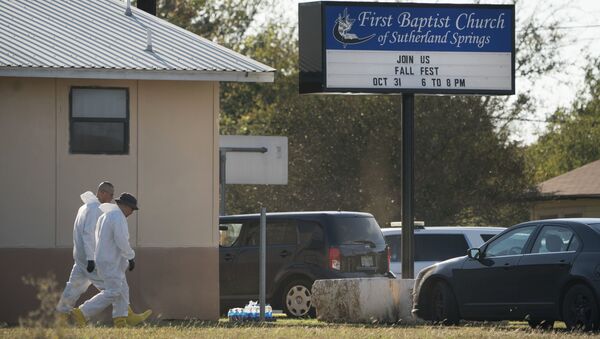 The Pentagon has known for a long time about the US military’s failure to report the criminal convictions of servicemen to national crime databases. One such reporting failure allowed former airman Devin Kelley to purchase a semi-automatic rifle that he used to kill 26 people and wound 20 in Sutherland Springs, Texas.

On Sunday, Kelley opened fire on a baptist church, killing 26 people — including a pregnant woman and her eight-month-old fetus. Kelley had previously been convicted of domestic abuse in 2011 when he reportedly assaulted his wife and stepson, threatening the former with a handgun and fracturing the latter's skull.

Were he a civilian, Kelley would not have been able to purchase a firearm as the 1996 Lautenberg Amendment bans purchases to anyone convicted of domestic abuse. But Kelley was serving in the US Air Force at the time of his conviction, which means his case was handled via a court-martial.

Under federal law, the US military is to report cases like Kelley's to the FBI's National Instant Criminal Background Check System (NICBCS) — but the USAF failed to do so. As such, Kelley was able to purchase the murder weapon at a San Antonio sporting goods store in 2016. All he had to do was lie on the application form and claim he had never been convicted of a crime. The USAF has initiated a review as to why Kelley's case, and cases like his, were never reported to the NICBCS.

However, this is not the first time that this has happened: since the Lautenberg Amendment passed, the Pentagon has known about the failures of the US military to report court-martials to civilian law enforcement. In 2015, the Inspector General for the Department of Defense (DoD IG) reported that 30 percent of court martials were improperly reported to the FBI, with fingerprints or case outcomes missing from the files.

But the issue dates back even farther. A 1997 DoD IG report concluded that court-martials were significantly underreported by all branches of the US military, especially the Navy, which failed to report a bafflingly high 94 percent of case outcomes.

"The lack of reporting to the FBI criminal history files prevents civilian law enforcement agencies from having significant information on military offenders," the report concluded. It cited poorly-worded Pentagon guidelines and a lack of respect for the effectiveness of FBI databases as the primary causes of the lapses. "In [the US military's] view, little benefit in solving cases is achieved by providing timely information."

Defense Secretary James Mattis said in a Tuesday statement that he directed Acting DoD IG Glenn Fine to review the circumstances surrounding Kelley and "define what the problem is."

Even hawkish and pro-military politicians have expressed horror at the Air Force's failure to report the charge, which could have potentially prevented the tragedy. Rep. Mac Thornberry (R-TX), who leads the House Armed Services Committee and in 2016 received a perfect score from the conservative think tank "Center for Security Policy (CSP)," demanded an external probe.

"I don't believe the Air Force should be left to self-police after such tragic consequences," Thornberry said in a statement, adding that he fears the problem of unreported convictions within the US military may be more widespread than previously believed.

Sen. John Cornyn (R-TX), the House Majority Whip and recipient of a 93 percent score from CSP in 2016, said that he was drafting legislation that would require the military to swiftly report criminal history data to civilian databases. This requirement already exists, but only as an internal Pentagon rule.