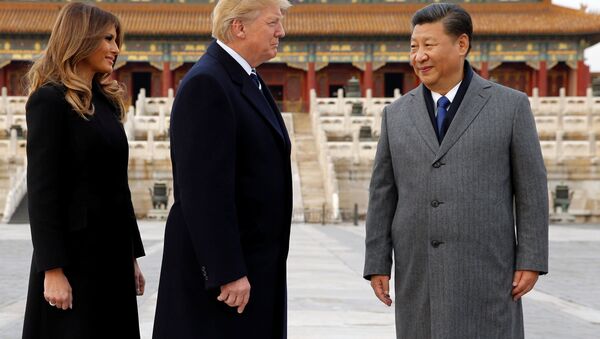 © REUTERS / Jonathan Ernst
Subscribe
US President Donald Trump has arrived in Beijing for a two-day visit as part of his five-nation tour of Asia. Sputnik looks at how the relationship between the US and China has changed Richard Nixon's historic eight-day trip in 1972.

Chinese President Xi Jinping rolled out the red carpet for US President Donald Trump on Wednesday, November 8, as he made his first visit to Beijing.

On behalf of @FLOTUS Melania and I, THANK YOU for an unforgettable afternoon and evening at the Forbidden City in Beijing, President Xi and Madame Peng Liyuan. We are looking forward to rejoining you tomorrow morning! https://t.co/ma0F7SHbVU

​Trump was shown around the Forbidden City, the ancient home of China's emperors, before the pair got down to business and discussed thorny issues like North Korea and trade.

He is the eighth US President to visit China but the relationship between Beijing and Washington has changed out of all recognition since the first, Richard Nixon, visited in 1972. 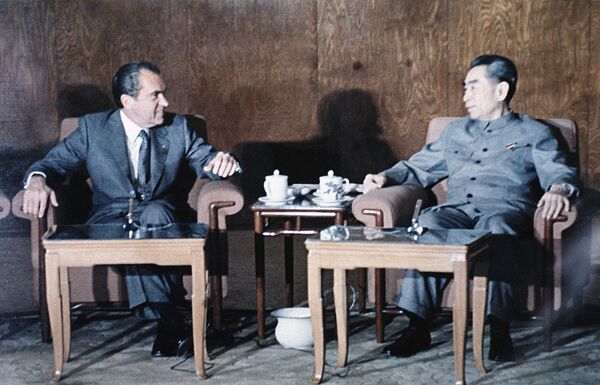 US President Richard Nixon and Premier Chou En Lai meet in Beijing, Feb. 21, 1972, for the start of talks.
© AP Photo

The People's Republic of China came into being in 1949 and the US was less than enamored of the new communist state, led by the charismatic Mao Zedong.

China Ignored by US for Years

For more than 20 years Washington ignored Beijing — then known as Peking — and retained relations with the defeated side in the Chinese civil war, the nationalist Kuomintang (KMT), who had sought sanctuary on the island of Formosa and set up the new state of Taiwan, which is still formally known as the Republic of China.

Leaving South Korea now heading to China. Looking very much forward to meeting and being with President Xi!

​Relations between the two worsened when Mao sent the People's Liberation Army into the Korean peninsula to rescue Kim Il-Sung's beleaguered forces, which had retreated almost to the Yalu river in December 1950.

The Korean War formally ended in July 1953, but the US and China remained the best of enemies for almost two decades.

Then in February 1972 President Nixon, like Trump a Republican, made a diplomatic breakthrough when he visited Mao in Beijing.

Nixon had two aims — to drive a wedge between the Soviet Union and China, and to get the Chinese to put pressure on their ally Ho Chi Minh to come to the negotiating table and agree an end to the Vietnam war, which was costing thousands of US soldiers' lives.

"If we can find the common ground on which we can both stand the bridge between us and build the new world, generations in the years ahead will look back and thank us for this meeting we have held in this past week," said Nixon at the end of the eight-day trip.

US Formally Recognized China in 1979

Ironically the US still did not recognize the People's Republic as a state, something that had to wait seven years when Jimmy Carter was in power and the KMT leader Chiang Kai-shek had died.

At the time of Nixon's visit in 1972 China's economy was woeful, still recovering from Mao's Great Leap Forward policy of rapid industrialization in the late 1950s.

It was only after Mao's successor Deng Xiaoping dramatically modernized the Chinese economy with his gaige kaifang (reform and opening up) policy in the 1980s that China's huge population and natural resources turned it into an economic powerhouse. 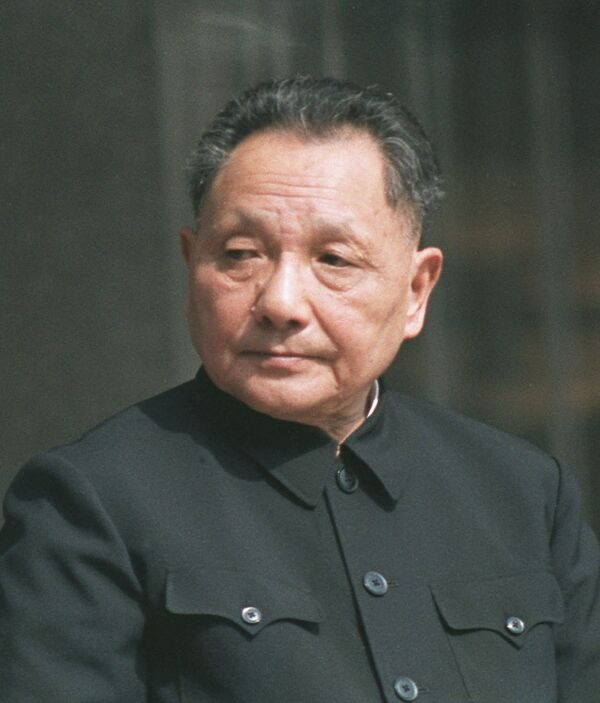 The IMF and the World Bank both consider China to have a bigger economy than the US in terms of Purchasing Power Parity (PPP), a crucial measure that adjusts countries' GDPs for differences in prices.

China's growing economic strength in the last decade has shown by the fact that US presidents are visiting Beijing more than ever before.

​Ronald Reagan visited only once during his eight years in office and his successor George H.W. Bush also went there only once, as did Bill Clinton.

But by the start of the 21st century, the penny had dropped.

George W. Bush visited no less than four times between 2000 and 2008 and Barack Obama traveled there three times, the most recent of which was in September last year.

Chinese leaders were also welcomed to the White House far more than in the past and relations with Taiwan were put on a slightly cooler footing.

During his election campaign Trump heavily criticized China — which he pronounces Chiyna — but it is telling that only 11 months after reaching the Oval Office he is making a two-day trip there and playing nice.

In August 2017, China owned US$1.2 trillion of America's national debt and in October 2016 the Chinese state owned US$3.12 trillion worth of foreign currency reserves, two-thirds of which is believed to be in dollars.

If China were to sell large amounts of dollars it would massively affect the currency markets.

China also has massively increased its military strength in recent years and has been flexing its muscles in the South China Sea. 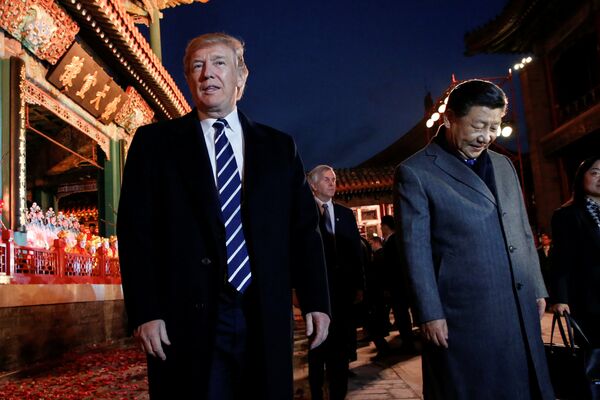 On Thursday, November 9, Trump's official ceremonial welcome at the Great Hall of the People in Beijing is due to be broadcast live on national television.