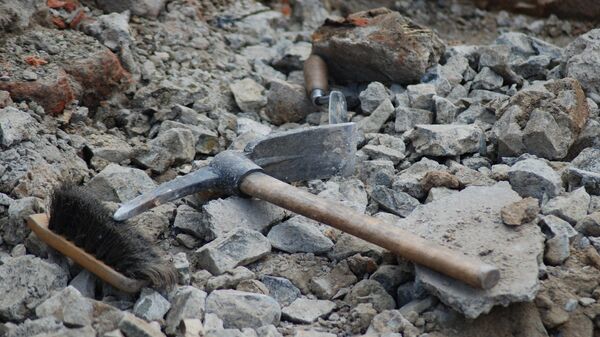 A joint team of German and Egyptian archaeologists working at the Watfa site in Egypt's Fayoum province discovered an ancient gym that dates back to the Hellenistic period.

According to Ayman Ashmawi, the head of the Ancient Egyptian Antiquities Sector, the gymnasium has a large hall for meetings that was once decorated with statues, a dining hall and a courtyard. Next to the gym is a 200-meter track that is "long enough to engage in the typical race."

Researchers also found out that gardens had "surrounded the building to complete an ideal layout of a center of Greek learning." Talk about picturesque.

The site dates to a time when Egypt was ruled by Greeks after being conquered by Alexander the Great in the 4th century BC.

Per Cornelia Römer, the leader of the team from the German Archaeological Institute, ancient Greek gyms such as the newly discovered gymnasium were typically "private foundations by rich people who wanted their villages to become even more Greek in aspect."

​"The young men of the Greek-speaking upper class were trained in sports, learned to read and to write, and to enjoy philosophical discussions," Römer's statement said. "All big cities of the hellenistic world like Athens in Greece, Pergamon and Miletus in Asia Minor, and Pompei in Italy had such gymnasia."

"The gymnasia in the Egyptian countryside were built after their pattern; although much smaller, the gymnasion of Watfa clearly shows the impact of Greek life in Egypt, not only in Alexandria, but also in the countryside," the statement added.

World
Tombs of Great Pyramid's builders discovered in Egypt
The experts later estimated that when the village was first built all those years ago it housed a total of 1,200 inhabitants. Two-thirds are thought to have been Egyptian while the other third were "Greek-speaking settlers."

The gymnasium, roughly 50 miles from Cairo, sits inside the ancient village of Philoteris, according to a Facebook post from Egypt's Ministry of Antiquities. The post also indicates that the village, founded by King Ptolemy II in the third century BC, was named after his second sister Philotera.

This find is just the latest in a series of discoveries made by archaeologists in Egypt. Just last week another international team of researchers announced they'd discovered a "big void" inside Egypt's Great Pyramid of Giza.

The German team, surveying and excavating at the Watfa site since 2010, has been working alongside the Ain Shams University.