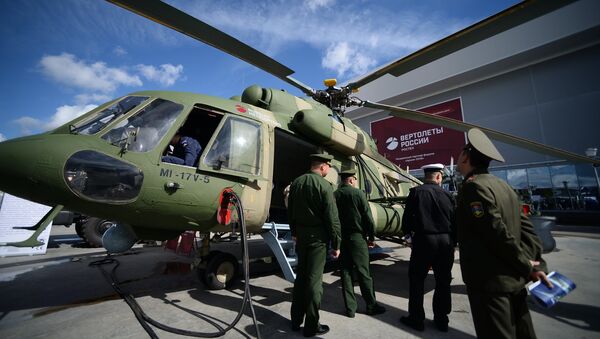 © Sputnik / Maksim Blinov
/
Go to the photo bank
Subscribe
Russia continues to cooperate with Thailand, which is Russia's longest-running partner in the region.

“In September, the Thai side announced a tender for supplies of attack helicopters. Rosoboronexport [state-owned arms exporter] is participating in this tender with Ka-52 and Mi-35M helicopters,” Petukhov said on the sidelines of the Thailand Defense & Security exhibition.

At the same time, Russia and Thailand have signed a contract on the supply of two Mi-17V-5 helicopters, an agreement on supplying a batch of such aircraft may be reached later.

“In September 2017, a contract was signed on supplying two Mi-17V-5 helicopters to the Royal Thai Army. [Supply] of a batch of aircraft could be under discussion in the future,” he said.

The Ka-52 Alligator is a highly maneuverable reconnaissance and combat helicopter, equipped with powerful offensive weapons, suitable for takeoff and landing in hot climates and mountainous terrains and easy to service.

Russia Exports Mi-28NE Helicopters With Newest Defense Systems for 1st Time
The Mi-35M multirole attack helicopter is a modified version of the Mi-24V helicopter developed by the Mil Moscow Helicopter Plant, and has been produced by Russia's Rostvertol plant since 2005.

The Thailand Defense & Security exhibition kicked off on Monday and will last through Thursday.

This year marks 120 years of diplomatic relations between Russia and Thailand.

He pointed out that Russia was actively developing defense industry cooperation with Vietnam, Indonesia and the Philippines.

"Indonesian Defense Ministry’s leadership and the command of the Marine Corps greatly appreciate the technical and performance characteristics of the delivered BMP-3F vehicles, there is an [Indonesian] intention to continue purchasing these military vehicles," Brakunov said.

The first batch of 17 BMP-3F vehicles was delivered to Indonesia in November 2010 under the $1-billion contract signed in September 2007. In May 2013, Moscow and Jakarta signed a new contract on delivering 37 infantry fighting vehicles, which was implemented in 2014.