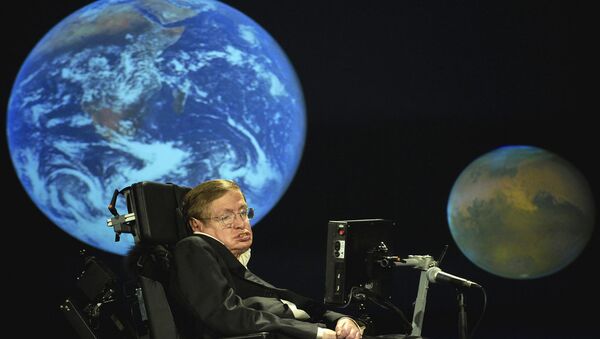 According to Hawking, our planet will become overcrowded, and increased energy consumption will turn Earth into a ball of fire because of the rising population and exponential consumption. But he seems to have a solution.

Physicist Stephen Hawking has warned that the human race will cease to exist on Earth after humans turn it into a giant fireball by 2600 year.

To escape from the catastrophe, humans must "boldly go where no one has gone before," Hawking declared during his video appearance at the Tencent WE Summit in Beijing, as quoted by the New York Post.

The physicist appealed to investors to support his project Starshot Breakthrough, which involves a journey to the closest star outside our solar system – Alpha Centauri, one of the closest star systems at 4.3 light-years away from Earth.

The scientist hopes that the system may have exo-planets orbiting it, which could be suitable for life just like on Earth.

Rise of the Machines: Elon Musk Names AI as 'Greatest Risk' to Mankind (VIDEO)
Starshot Breakthrough’s director, a former head of NASA’s Ames Research Center, also made an appearance in Beijing saying, "Maybe if all goes well, sometime a little after the middle of the century, we’ll have our first picture of another planet that may be life-bearing orbiting the nearest star."

Just a day earlier, Hawking appeared at Web Summit in Lisbon, Portugal, to warn humanity about the development of artificial intelligence, saying, "AI could develop a will of its own."

"The rise of AI could be the worst or the best thing that has happened for humanity,” he added, explaining that robots are already taking over millions of jobs, and technologists must pause and focus not just on making AI more successful, but try and make it more beneficial to humanity.

According to Hawking, the timing might be faster than we think, as AI could outshine humans in just a few decades.

The famous futurist and businessman Elon Musk has also previously warned about the future of the human race, as potentially superior artificial intelligence has already been created.