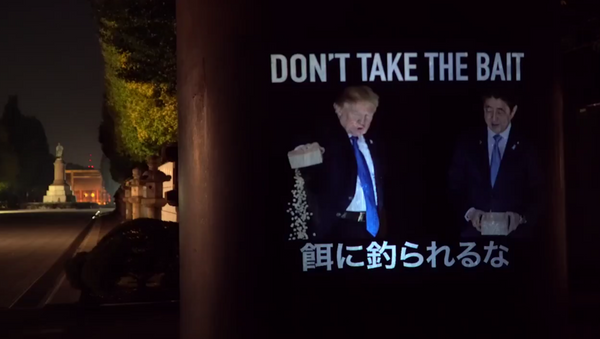 © Screenshot/Bell Visuals
Subscribe
After a busy year of projecting images critical of US President Donald Trump on federal buildings throughout the District of Columbia, Robin Bell, the founder of Bell Visuals, booked a trip to Japan in an attempt to take a break from the president's shenanigans.

Unfortunate for Bell, he and his partner, Sorane Yamahira, didn't realize that when they booked their trip to Tokyo that POTUS would also be heading to The Land of Rising Sun at the same time.

​Though the imaginative protester never had any plans to create a projection while on vacation, Bell was inspired the moment he caught a glimpse of Trump and Prime Minister Shinzo Abe feeding some koi fish.

So after animating the image of Trump and Shinzo's awkward koi moment, Bell, aided by the help of Yamahira, pasted the words, "Don't take the bait. Beware of these men. Resist all wars" on the image along with the Japanese translation.

​Though Bell generally uses a van to power his projections, he opted this time to use a small battery-operated projector to display the image on Tokyo's Yasukuni Shrine, The Washington Post reported.

"I had to do something. It is crazy, with the prime minister and Trump," Bell told the Post. "They are really banging the drums of war, and I wanted to make sure people weren't distracted."

"We need level heads; we need cool, calm and collected people. Clearly, these two are not," Bell added.

​"I didn't want to ruin my vacation, but we felt like we had to do it," Bell said. "We are staying at the center of where all the Trump stuff is going down [in Japan]. I think we are actually closer to Trump now than when we lived in DC, and we live in Mount Pleasant [a Washington neighborhood a few miles from the White House]."

Bell's latest projection was up for roughly 20 minutes Monday, he told the outlet. Trump, who is on a 12-day trip to Asia, arrived in Japan Sunday.