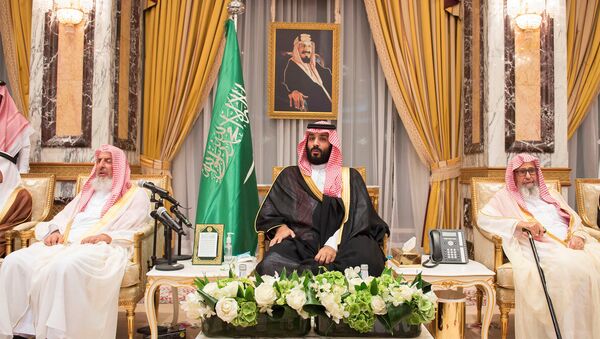 © REUTERS / Bandar Algaloud/Courtesy of Saudi Royal Court
Subscribe
International
India
Africa
The detention of dozens of high-ranking, wealthy Saudi Arabian officials was just the beginning of a weekend of seismic events that may have culminated in the most volatile situation in the Gulf giant in 50 years.

"We have what many are calling a ‘soft coup' in Saudi Arabia," veteran intelligence analyst John Kiriakou said on Radio Sputnik's Loud & Clear Monday. Eleven princes and 38 officials were detained at the Ritz Carlton Hotel in Riyadh over the weekend as part of a crackdown on corruption.

Further, the now-ex-prime minister of Lebanon, Saad Hariri, who is actually a Saudi Arabian national with a Saudi passport, arrived in Saudi Arabia over the weekend and announced his resignation from his position in Lebanon on national Saudi TV. Hariri claimed his life was in imminent danger from Hezbollah, which appears to have taken Hezbollah by surprise as well as many others in Lebanon.

Speaking from Beirut, Jana Nakhal, an independent researcher and member of the central committee of the Lebanese Communist Party, told Sputnik Radio's Loud & Clear, "nobody expected this to happen," referring to Hariri's self-removal and the mass purge of powerful Saudi businessmen.

​The main newspaper in Lebanon on Monday had a large picture of Hariri calling him "the hostage," Nakhal said. "We don't know what's going on, we don't know where he is, and there are a lot of rumors he could be arrested along with the other Saudi princes," she said.

What's more, on Sunday, Saudi state media reported that Prince Mansour bin Muqrin died in a helicopter crash. "While returning in the evening of the same day, contact with the plane was lost in the vicinity of the Reda reserve," the Saudi Press Agency reported. "The authorities are currently searching for survivors as the wreckage has been found." State TV later broadcast that Muqrin, along with seven others, had died in the crash.

​Some say the flurry of events may simply be chaos, while others see the developments as a way for Crown Prince Mohammed bin Salman to consolidate power while blaming perennial Shiite rival Iran, with which Hezbollah has long been linked.

"I would also add that the Saudis called upon the Palestinian president today to visit and discuss the Palestinian issues," Nakhal noted, saying that this should be considered when looking at the situation as a whole in the Middle East right now. Nakahl agreed with Kiriakou, however, saying "I would definitely see it as a consolidation of the crown prince's coming into power."

"But at the same time you can link it to what's going in Syria. The direction of the fight has been changing… practically, we're talking about a situation in which Hezbollah is gaining power and gaining support," Nakahl said.

Further, allegedly Iranian-backed Houthi rebels in Yemen fired ballistic missiles at Riyadh over the weekend, which were shot down by missile defense systems. In response, the Saudi-coalition launched 29 missile attacks on Sana'a Sunday night.

"This act of aggression against Riyadh proves the involvement of one of the terror states supporting the Houthis," a spokesman for the Saudi-led coalition in Yemen said on a Saudi TV channel November 4. For his part, Trump responded almost identically to the attempted missile attack as the Saudi Arabian government did, but did not mince words about who the "terror state" was.

"A shot was just taken by Iran, in my opinion, at Saudi Arabia. You know about that, right? You saw the missile that went out. And our system knocked the missile out of the sky," Trump said Saturday.
On Monday, Trump reiterated his full support for Riyadh, stating, "I have great confidence in King Salman and the crown prince of Saudi Arabia."

I have great confidence in King Salman and the Crown Prince of Saudi Arabia, they know exactly what they are doing….

​Not everyone is so sure the situation in Saudi Arabia is stable. "The kingdom is at a crossroads: Its economy has flatlined with low oil prices; the way in Yemen is a quagmire; the blockade of Qatar is a failure; Iranian influence is rampant in Lebanon, Syria and Iraq; and the succession is a question mark. It is the most volatile period in Saudi history in over a half-century," Bruce Reidel, director of the Intelligence Project at the Brookings Institution, wrote in a column Sunday for Al-Monitor's Gulf Pulse.

"I totally agree with that," Nakhal said after Kiriakou read the Riedal excerpt. "In these past two days, it was practically impossible for us to understand what was going on," she said.