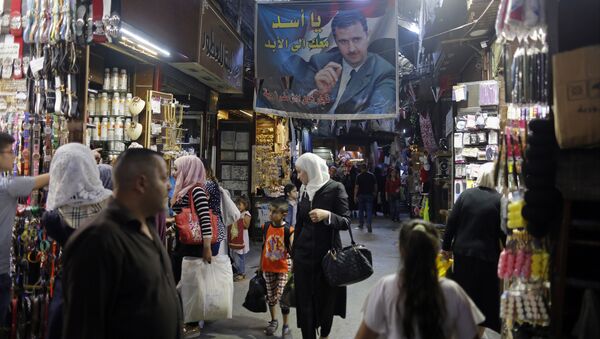 Suliman Mulhem
All materials
In Syria's eastern province of Deir ez-Zor, units from the Syrian Army, alongside troops from the wider coalition of pro-government forces, are continuing to advance against Daesh terrorists, liberating additional cities, villages and oil fields at an impressive pace.

Although Islamist militants remain present and active in other parts of the war-torn state, particularly in the north-western province of Idlib, it is clear the secular Syrian government has survived the multi-year conflict.

Several world powers have also come to this realization, and have subsequently toned-down their pro-opposition rhetoric, as well as their calls for an immediate political transition away from President Bashar al-Assad.

Both private and state-owned businesses have expressed interest in playing a role in the country's post-war reconstruction, and economy.

In November, Oman and Syria signed a memorandum of understanding (MoU) for cooperation in the energy sphere. Oman's expertise in the oil sector could be employed to restore facilities damaged by the conflict, increasing output capacity, thus, reducing Syria's reliance on its allies to meet domestic demand for oil.

Unlike other members of the Gulf Cooperation Council (GCC), Oman decided not to sever ties with Syria in response to the ongoing crisis.

Although around 80% of Syria's total oil reserves are currently held by militants from the Kurdish-led Syrian Democratic Forces (SDF), it's highly probable that the Syrian Army will regain control over them over the coming months, either via diplomacy, or military action.

Meanwhile, Brazil's Foreign Minister said they are looking to reopen their embassy in Damascus, and entirely restore diplomatic relations with Syria.

A number of Brazilian corporations attended the Damascus International Fair earlier this year to assess opportunities in the Syrian market.

Although the Brazilian government adopted a relatively neutral stance with regards to the Syria crisis, and was never considered to be a leading member of the anti-Assad bloc, their decision to restore full diplomatic relations with Damascus is encouraging.

The US and Europe remain resistant to calls for trade sanctions against Syria to be lifted, while also warning that financial aid for reconstruction would be contingent on the implementation of a political process to remove President Assad from office.

"We believe that the only way forward is to get a political process going and to make it clear to the Iranians, Russians and Assad regime that we, the like-minded group, will not support the reconstruction of Syria until there is such a political process and that means, as Resolution 2254 says, to a transition away from Assad," UK Foreign Secretary Boris Johnson told delegates at a meeting in New York earlier this year.

Defiantly, President Bashar al-Assad has previously expressed his unwillingness to voluntarily stand down at the request of foreign powers, maintaining that only the ballot box will determine his future in Syrian politics.

Despite Boris Johnson's comments, it's likely that Europe will provide financial aid to Syria, or at least lift or scale down sanctions imposed against the Syrian economy, even if President Assad remains in office.

Ultimately, due to Europe's lax immigration and welfare policy, Syria's revival is firmly in its interest, as Europe is currently spending billions of dollars annually on migrant welfare; Germany alone will spend an estimated US$110 billion on migrant welfare by 2020.

A swift economic recovery could pave the way for many Syrian refugees to return home, easing pressure on Europe.

The US is far less likely to remove obstacles from Syria's path, economically speaking, as it isn't burdened with a large number of Syrian refugees. Furthermore, President Trump may keep the sanctions in place as a punitive measure against Syria's closest regional ally, Iran.

Responding to Haaretz: President Assad Isn't Selling Syria to Iran
Even in a pre-crisis context, the US had frosty relations with Syria due to its opposition and condemnation of the US-led invasion of Iraq in 2003.

Syria enjoyed better relations with the EU, with cooperation throughout many sectors of the economy.

Although it remains unclear if the EU will reinitiate its various trade and collaboration agreements with Syria, sanctions are likely to be lifted at some point. However, targeted sanctions against some government and security officials will almost certainly remain in place indefinitely.

Crucially, foreign investment and trade would essentially be unhindered under this arrangement.