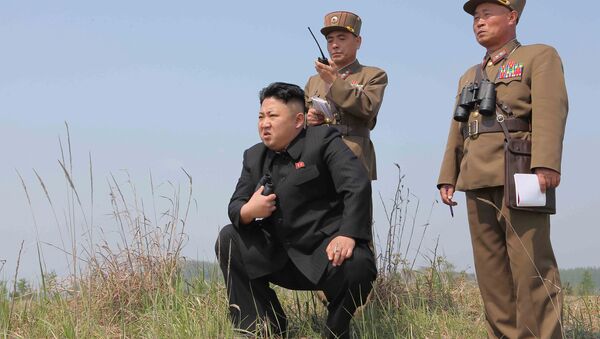 © REUTERS / KCNA
Subscribe
Pyongyang responded to US President Donald Trump’s latest salvo in their war of words by calling the American leader’s remarks during his trip to Asia “foolish.”

​After speaking at the air base, Trump met with Japanese Prime Minister Shinzo Abe, shaking hands at the Kasumigaseki Country Club where the duo played a round of golf.

​During a speech in Tokyo, Trump reiterated a call made by Vice President Mike Pence earlier in 2017, that the "era of strategic patience is over."

"We are working to counter the dangerous aggressions of the [North Korean] regime," he said. "The regime continues development of its unlawful weapons programs, including its illegal nuclear tests and outrageous launches of ballistic missiles directly over Japanese territory, [which] are a threat to the civilized world and international peace and stability."

"We will not stand for that: the era of strategic patience is over," Trump remarked.

US Vice President Pence to Pyongyang: 'Era of Strategic Patience Is Over'

North Korea threatened "merciless retaliation" for Trump's "foolish remarks," according to a November 5 report by Rodong Sinmun, which is one of the main news outlets of North Korea's ruling Worker's Party of Korea.

Trump, it writes, is "seriously stimulating the DPRK by making foolish remarks."

"Nobody can predict when Trump does a reckless act," the report continues. "The only… way for checking his rash act is to tame him with absolute physical power," the report said in English, adding, "if the US misjudges [North Korea's] toughest will and dares to act recklessly, the latter will be compelled to deal a resolute and merciless punishment upon the former with the mobilization of all forces."

When reporters asked Trump about the rationale for threatening North Korea, Trump told reporters "there's been 25 years of total weakness," adding that his administration would be "taking a very much different approach."

Meanwhile, in another interview that aired Sunday on "Full Measure," Trump reaffirmed that he would be willing to sit down and meet North Korean Supreme Leader Kim Jong-un. "I would sit with anybody I feel," he said, noting that "I don't think it's strength or weakness. I think sitting down with people is not a bad thing. So I would certainly be open to doing that."