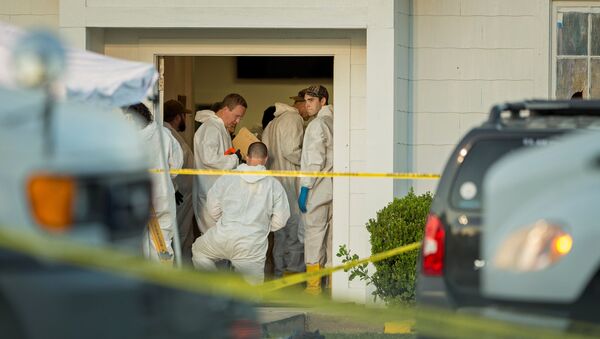 © REUTERS / Jay Janner
Subscribe
The US authorities are still trying to determine the motives of a lone gunman who brutally murdered at least 26 people during a shooting spree at a Texas church.

US investigators are currently attempting to uncover the motives of Devin Patrick Kelley, a 26-years old former member of the US Air Force who walked into the First Baptist Church in Sutherland Springs, Texas armed with Ruger AR semi-automatic rifle and murdered at least 26 members of the congregation, wounding an additional 20.

According to the Washington Post, it's been confirmed that Kelley enlisted in the military in 2010 and served as a logistical readiness airman, stationed at Holloman Air Force Base in New Mexico. However, he was court-martialed in 2012.

All attempts to contact the gunman’s family have so far proved unsuccessful, the newspaper adds.

US President Donald Trump said during a press conference in Tokyo that according to "preliminary reports," Kelley was "a very deranged individual, a lot of problems for a long period of time." WaPo points out, however, that the president did not provide the basis for his statement.

After carrying out his shooting spree, Kelley attempted to flee the scene in his SUV while being chased by an armed local resident, but ended up crashing his car in a ditch. He was found dead in his vehicle in what is believed to have been a suicide.

Holloman AFB where Kelley was stationed is home to one of the largest training centers for drone pilots as well as the 49th Wing of the US Air Force, which mostly consists of Predator and Raptor drones. According to Mother Jones, these deadly UAVs are regularly sent to foreign conflicts, where they are overseen by a three-person crew (a pilot, a sensor operator, and an intelligence analyst).

While most of their work is dedicated to hours of monotonous reconnaissance, those tasked with directing these robotic planes have been blamed for numerous civilian deaths, many of which are not in countries the United States is technically at war with.

DavidM
6 November 2017, 18:26 GMT
000000
He was trained well by the US military. They are great at killing civilians and bombing funeral parties and hospitals. You have to wonder why they let prime man power like him go. He had all the requirement to be send overseas in those illegal wars and do what he was trained for.